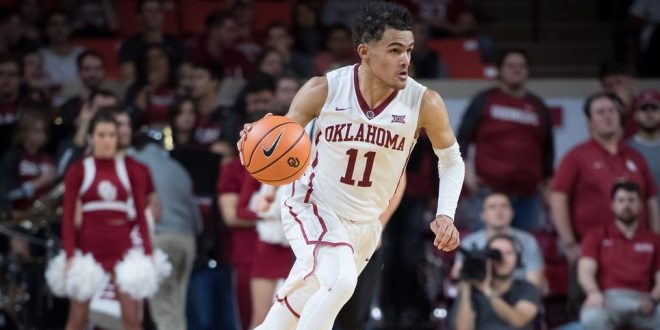 Trae Young Is On Another Level

Since KenPom started tracking player usage in 2004, no player has had a higher usage rate than Trae Young. Young is being used on 40.5% of Oklahoma’s possessions and is leading the NCAA in points (30.1 PPG) and assists (10 APG) per game. On top of that, he’s shooting 45.8% from the floor and 40.7% from beyond the arc. Young has taken 29.5% of the Sooners’ shots this season and is responsible for 27.3% of Oklahoma’s made shots.

Coming out of Norman North High School, Young was not ranked in the Top 20 of the Class of 2017. Young was regarded as the 23rd best prospect in that class and chose the hometown Oklahoma over Kansas, Texas Tech, Kentucky, Oklahoma State and Washington. While the Sooners were excited to get the No. 1 player in the state of Oklahoma, nobody expected this level of production.

So far this season, the turnaround has been dramatic. OU is ranked 11th in the nation in offensive efficiency, shooting 41.1% from long-range (16th in the NCAA) and 55.7% from inside the arc (27th in the NCAA). The Sooner have jumped out to a 4-1 record in the consensus best conference in college basketball and have charted non-conference wins against Oregon, USC and Wichita State on the season.

According to KenPom, Trae Young’s season is comparable to Kyrie Irving in 2011 with Duke, D’Angelo Russell in 2015 with Ohio State, Cameron Payne in 2014 with Murray State and Dennis Smith in 2017 with NC State. Irving, Russell and Smith were all taken within the top 10 picks of their respective NBA Drafts, while Payne was selected 14th in the 2015 NBA Draft.

In the team’s last five games, Young has played 91% of the available minutes at point guard for Oklahoma. He’s also ranked 5th in the nation in free throw rate and is shooting 83.2% from the charity stripe. Young is averaging 31.2 points, 8.8 assists, 5.6 rebounds, 2.2 steals per game while shooting 41.1% from the field and 40% from long-range during Big12 play.

Trae Young is the 6th player in @Big12Conference history to score 40 points and get 10 rebounds in a game.

Depending where you look, Trae Young is projected to go at a variety of different spots in the 2018 NBA Draft, assuming that he declares after his freshman season. Here’s a compilation of those lists.

When Can I See Trae Young Next?

The freshman phenom takes the floor again on Tuesday night at 9 p.m. on ESPNU when the Sooners square off against Kansas State in Manhattan, Kansas.