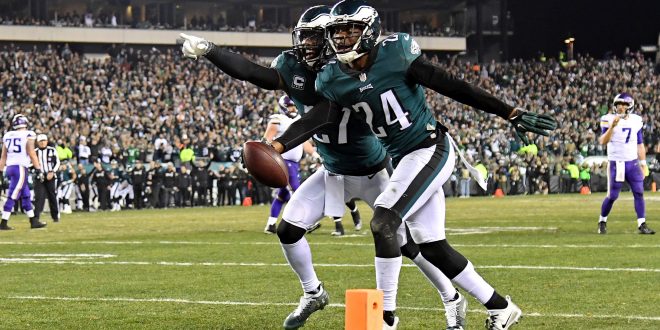 The Philadelphia Eagles are heading to their third Super Bowl in franchise history. They’ll face the New England Patriots on Feb. 4 in Super Bowl LII in Minneapolis.

Saying those two sentences seemed improbable to many just over a month ago. The Eagles were soaring, owning the top spot in the NFC, when leader and MVP-candidate quarterback Carson Wentz went down with a torn ACL in a week 14 win over the Rams.

Despite backup Nick Foles coming in and helping the team earn the win, the injury to Wentz took the Eagles from a Super Bowl favorite to an underdog the rest of the way.

“Our season still wasn’t over you know, we were still in the driver’s seat,” Eagles head coach Doug Pederson said. “… I just felt confident in my players and the coaches that we were still a good football team.”

And that’s what they showed. As home underdogs, they took down the defending NFC champion Atlanta Falcons with an impressive defensive performance in a 15-10 win. Then, as three-point home underdogs to Case Keenum and the Vikings, the Eagles turned in arguably one of their best performances of the season in the 38-7 blowout.

Philly’s defense was outstanding, outperforming their much hyped up counterparts on the Minnesota sideline. They shutout the Vikings over the last 55 minutes of game time. In addition, they forced three huge turnovers, including a pick-six from Patrick Robinson to flip the momentum and tie the game at 7-7 halfway through the first quarter.

Foles looked like the Foles of the 2013 when he threw for 26 touchdowns and two interceptions. Against the Vikings, Foles had a near perfect passer rating as he went 26-for-33, 352 yards and three touchdowns. That’s a huge step forward from his struggles late in the regular season and in the divisional round game

“The special thing is, no one in the locker room doubted me,” Foles said after the game. “Everyone just kept believing.”

And believing is what the Eagles will continue doing as they head into Super Bowl LII. They’ve been doubted for months now, and they’ve relished the underdog role, a role they’ll surely embrace against the Patriots.

If they play in that game like they did against the Vikings, the Eagles will be flying at the highest of heights.