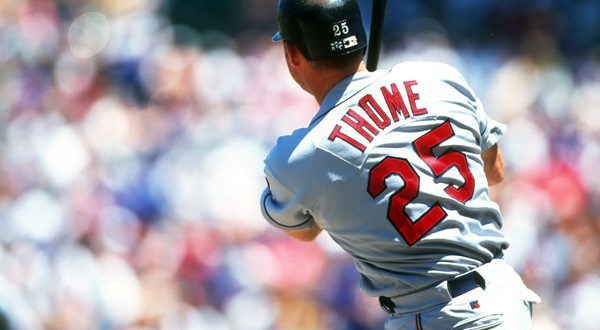 The election results for the 2018 Baseball Hall of Fame ballot are being revealed on January 24th. Powerhouse Jim Thome enters his first year on the ballot with a chance to join Cooperstown. He may not have the reputation of Chipper Jones and others, however, he has a career full of impressive accolades. A statue of Thome sits outside Progressive Field, home of the Cleveland Indians, after his successful 11-year stint with the team.

Jim Thome left his mark on the diamond.

Will he punch his ticket to Cooperstown? pic.twitter.com/GdLg6ryBOX

Hitting 612 home runs, Thome is one of few to be a part of this prestigious group. Therefore, his home runs helped him amass almost 1700 RBI in his career. An on-base and slugging percentage equaling .956, at least 1500 runs and 1,700 walks, and more depict his strength in the batters’ box. Despite hitting 40 home runs in six seasons, he never won a MVP award. Nonetheless, he is a five-time all-star and a silver slugger. Thome finished as high as fourth in MVP voting and helped the Indians reach their first World Series since 1954. Thome is top 50 in many career statistics, including extra-base hits, at-bats per home runs, runs created, and more.

Jim Thome is your guy. He owns the @MLB record with 13. pic.twitter.com/9uypkik3GO

Jim Thome is not linked to any performance-enhancing drugs unlike other players on the ballot. Thome is loved by fans of the Cleveland Indians and the other five teams he played for in his 22-year career. Thome is known for being humble and giving back to his community. Philanthropy efforts for kids in his home state of Illinois and around the country highlight just a portion of his charitable actions during and after his playing career.