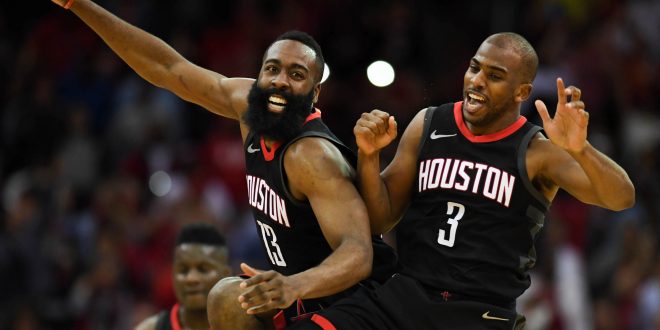 The Miami Heat fell to the Houston Rockets 99-90 last night as James Harden led the Rockets with 28 points.

The Heat were up by as much as 13 in the second quarter, and finished with a 50-46 lead before the half. The game stayed close in the third with the Heat always in the lead.

However, it didn’t last long. Rockets Clint Capela made a 1-foot ally Oop dunk shot off of James Harden’s assist, tying the game 52-52.

The Heat continued to keep the game close until James Harden made a 27-foot step back jump shot tying the game at 55-55. The Rockets took the lead, but Heat’s Josh Richardson’s driving layup tied the game, yet again, 57-57.

Neither team could make a shot until five minutes were left in the quarter. The game continued to be a one-to-two point difference throughout the third and fourth quarter.

It wasn’t until there was 2:48 left in the fourth when the Rockets held the Heat at 90.

Hassan Whiteside led the heat with 22 points and 13 rebounds. Wayne Ellington was right behind him with 13 points five rebounds and two assists.

The Rockets came in strong with Trevor Ariza back after serving a two-game suspension for a controversy involving the Clippers. Gerald Green was also suspended due to the altercation but didn’t play. Ariza had three points and five rebounds.

But it was James Harden who led the team with 28 points. Harden also added two rebounds and five assists. Chris Paul and Eric Gordon were right behind him with 16 points each. Paul added six rebounds and six assists.

Harden says having his team back was an important factor in last night’s win.

The Heat host the Sacramento Kings on Thursday night at 7:30 p.m. Meanwhile, the Rockets will visit Dallas Wednesday night at 8 p.m.