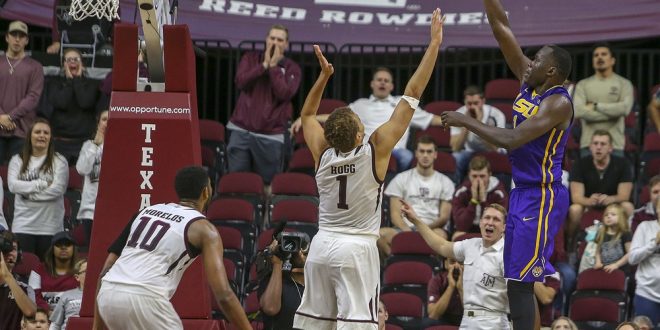 Tuesday night’s SEC contest between Texas A&M and LSU features two teams going in very different directions. The Aggies started out conference play 0-5, but have since gone 2-0 with wins over Ole Miss and Missouri at home. The Tigers started out 2-1 in conference play, but have lost their last three games to Alabama, Georgia and most recently Vanderbilt. LSU and Texas A&M are set to tip-off at the Maravich Assembly Center at 9 p.m. on ESPNU.

It's GAMEDAY! We'll see you in the PMAC tonight as we battle the Aggies at 8pm!#BootUp pic.twitter.com/8Mcp7uBDDF

Texas A&M’s Tyler Davis and Robert Williams represent one of the best frontcourts in the nation and are two big reasons why the Aggies are ranked 4th in the nation in rebounds per game. Tyler Davis was named this week’s SEC Co-Player of the Week along with Florida’s Jalen Hudson, combining for 31 points,16 rebounds and 3 blocks in the team’s last two games. In the same span, Williams is averaging 15.5 points, 9 rebounds and 2 blocks per game on 73.7% shooting. The key to shutting down Texas A&M is forcing the ball out of the paint and out of Davis’ and Williams’ hands. The Aggies twin towers have Teas A&M ranked 7th in the nation in defensive efficiency.

The Tigers wouldn’t be anywhere close to above-average this season if not for freshman Tremont Waters. While he’s struggled recently, only recording 13 points and 9 assists in the team’s last two games, Waters is leading LSU in points, assists and steals per game. The diaper dandy has scored at least 17 points ten different times this season and dropped 39 points vs. Marquette on November 22. The Tigers are putting up 79.3 PPG on the year, but have only averaged 65.7 PPG in their last three losses. Waters needs to step up if LSU wants to keep their heads above water during SEC play.

If Texas A&M wants to win this game, they’ll need to do so in a physical fashion. The Aggies are one of the best offensive rebounding teams in the country and make a living off of second-chance points. Along with their rebounding advantage, LSU is currently ranked 14th out of 14 SEC teams in free throw shooting, only sinking 61.2% of their attempts in conference play. Texas A&M shouldn’t be afraid to send LSU to the charity stripe.

The Tigers’ key to the game will be forcing turnovers against the Aggies. LSU is currently turning over SEC opponents on 19.6% of  possessions, which ranks 4th in the league. Texas A&M is turning the ball over the 3rd most of any SEC team during conference play. If LSU can get out into transition early, they’ll be able to keep up with the Aggies.