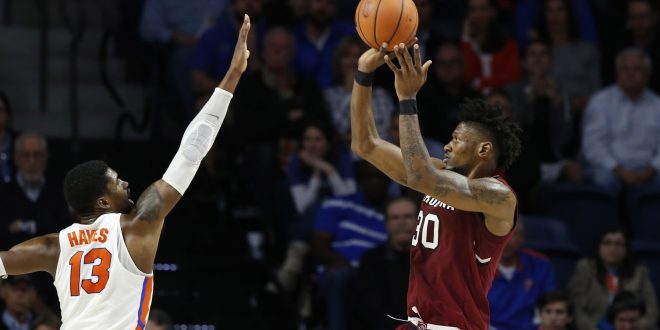 No. 20 Florida Falls to Unranked South Carolina Once Again

The No. 20 Florida Gators were unable to stop Chris Silva and Wesley Myers as the South Carolina Gamecocks pulled out the 77-72 victory on Wednesday night. Myers finished with a season-high 22 points on 5-7 shooting from beyond the arc, while Chris Silva posted his fifth double-double of the season. The Gamecocks shot 50% from the field and long-range in the second half and went 8-10 from the foul line. The Gators went 3-12 from deep in the second half and only scored 4 points in the final 2 minutes and 24 seconds of the game.

Jalen Hudson and Egor Koulechov tied for the team-lead with 16 points apiece, while Chris Chiozza finished the game with 10 points, 8 assists and 3 rebounds. Florida was able to get to the rim effectively, outscoring South Carolina in the paint 28-20, but was unable to find consistent offense late in the second half. The Gamecocks forced only two more giveaways than the Gators, but scored 12 more points off of turnovers.

South Carolina has moved the needle. Gamecocks go to Gainesville and beat Florida. That's the type of win that gets you into the NCAA Tournament.