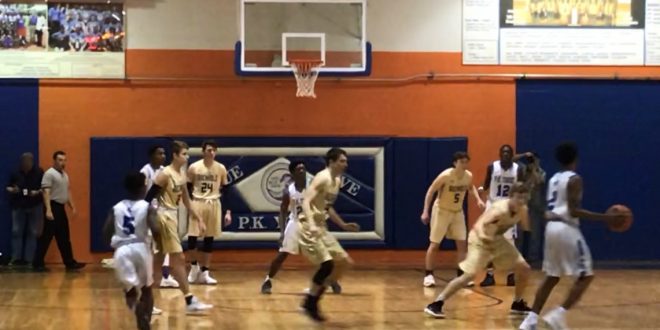 P.K. Yonge Boys Basketball are Catching a Wave After Third Win in a Row

“Intense” is the best way to describe the atmosphere at P.K. Yonge High this Tuesday night. The P.K. Yonge Blue Waves faced off against the Buchholz Bobcats in an epic match that happens only once a year. P.K. Yonge (10-9) were coming off a two-game winning streak against district rivals Maclay High (11-7) and Oak Hall (7-7). Buchholz (7-11) had come off an 18-point win against Vanguard (10-9) a couple days back.

Before entering this game, P.K. Yonge has dominated their previous two matchups against Buchholz for the past two seasons. Last season’s game ended with a score of 56-51, and the year prior was 53-47.

The last time the Bobcats claimed victory over the Blue Waves was back in 2014 when they won 47-44.

Back and Forth They Go

Both teams came out hot when they hit their first two field goals from beyond the arc. Buchholz later had a comfortable 12-7 lead before P.K. Yonge had a quick 8-0 run to take back the lead with a 1:55 left. Then, Buchholz junior Trent Whittemore connected on an and-one free throw to pull within four. The quarter ended with the Blue Waves on top 19-15.

By the end of the first half, the Blue Waves were still leading the Bobcats 27-24 with the help of sophomore Jalen Speer’s 16 points and a solid 3-3 shooting from the three-point line. The Bobcats leading scorer was Whittemore with 12 points.

The final quarter was a blast from start to finish. The two teams started to get chippy on both sides of the ball, especially in the final seconds of the game. Whittemore hit a decisive three-pointer with 9 seconds left to bring the game within two, 54-52.

Buchholz commits a foul on P.K. to force free throws and make one out of two. The Bobcats have possession with seven seconds left and turn the ball over. P.K. Yonge head to the free throw line, making both attempts, game over.

Game-sealing steak by P.K Yonge in the final seconds of the game. pic.twitter.com/yIsfQbcC4i

He also had some thoughts on Jalen Speer.

“He knocked down some big shots for us throughout the stretch,” said Blackmon. “We started feeding him the hot hand early and he just started hitting shots and rode him to victory.”

P.K. Yonge faces off against inner-city rivals the Eastside Rams (14-4) this Saturday @ Eastside, who is on a current two-game winning streak.

Recent grad from the University of Florida. Editing all articles on here while helping out the newbies. Love all things basketball.
@@MarcoJMartinez_
Previous Lorenzen Named SEC Player of The Week Ahead Of Gator Women’s Basketball’s Visit To No. 2 Mississippi State
Next Baseball HOF Class to Be Announced