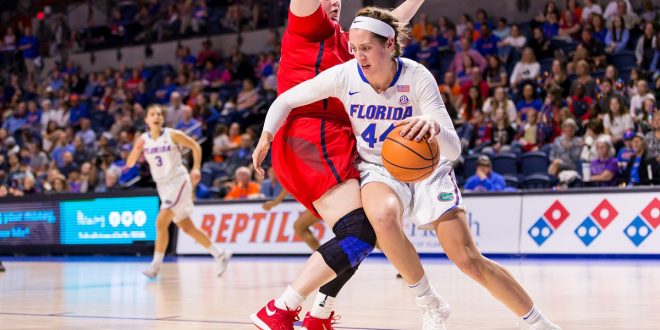 Lorenzen Named SEC Player of The Week Ahead Of Gator Women’s Basketball’s Visit To No. 2 Mississippi State

The last week for Florida women’s basketball brought many achievements and recognition. The Gators locked up their first two SEC wins of the season. Sunday’s win against Ole Miss brought the best finish to a game this season along with the most electric crowd of the season. The undefeated week brought recognition to two of Florida’s senior leaders. The Gators look to keep the good fortune going when they embark on the toughest stretch of the schedule. This stretch starts Thursday night against No. 2 Mississippi State.

Senior forward Haley Lorenzen will go down as one of the most decorated players in Florida women’s basketball history. One thing her legacy was missing was a SEC Player of the Week Award. Lorenzen was named SEC Player of the Week for the first time in her career Tuesday. She propelled Florida to its first two conference wins of the season last week with two double-double performances. Lorenzen posted 12 points and a team high 10 rebounds Thursday against Arkansas. Against Ole Miss Sunday, Lorenzen led the team in both points (18) and rebounds (13). She even added the game winning put back and sealing block. Lorenzen said she couldn’t have done it without her teammates.

Another member of Florida’s senior leadership, guard Dee Anderson, was presented with an accolade.  Anderson was selected to be a part of the 16th “So You Want To Be A Coach” program hosted by the Women’s Basketball Coaches Administration. The three-day workshop in Columbus, Ohio helps players transition to becoming coaches. Anderson said she is excited for the opportunity and is already starting develop a coaches mindset. This mindset Anderson is due in part to her increased leadership role. Anderson said she had to mature and be a more vocal presence in the locker room.

Florida is playing its best basketball of the season right now. They are crashing the glass, shooting the ball well and shutting down opposing offenses. In the win against Ole Miss, Florida was able to finish the game on an 18-4 run to complete a 13 point comeback. Lorenzen said the success came on both ends of the floor.

The Gators are faced with an extremely difficult part of the schedule. They aren’t just playing the top teams in the SEC, but probably the best teams in the country. This six game stretch starts against No. 2 Mississippi State. The 20-o Bulldogs are led by 6’7” forward Teaira McCowan, who is averaging a double-double for the season (20.5 points and 13.2 rebounds). Lorenzen said she’s ready for the challenge and to prepare the young forwards to guard McCowan.

If Florida wants to pull of the upset, the defense will have to be air tight. Anderson said the most important place for Florida to defend is the paint. Lorenzen said it will take a team effort on defense to take down Mississippi State.

The Gators look to pull of the upset when they travel to Starkville to face second ranked Mississippi State with tip-off set for 8:30 p.m.