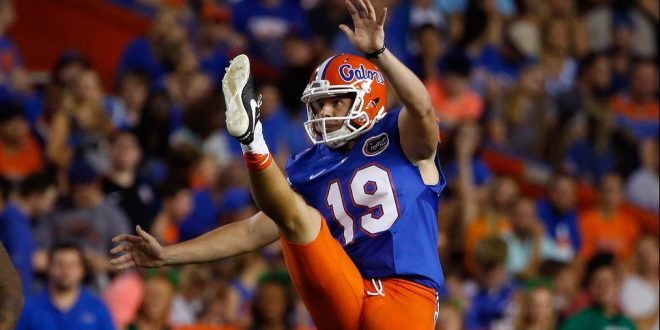 Johnny Townsend is Preparing for Future

Former Gator punter Johnny Townsend is preparing for his future after college. Townsend, a native of Orlando, FL was the second best punter in the class of 2013, according to recruiting website 247Sports. Townsend is a fan-favorite among Gator fans and leaves the team along with Eddy Pineiro, the former starting kicker. Despite playing as a graduate-senior, Townsend remained one of the best punters in college football.

Had an unbelievable experience at the @seniorbowl ! Thank you @SeniorBowlPhil for the hospitality and coordinating such an important event for our athletic careers pic.twitter.com/PT0cN6y5Hg

All in all, Townsend enters the NFL Draft pool with a stellar performance in the Senior Bowl Saturday. The senior punter kicked seven punts, averaging 41.5 yards. The former second-team All-American kicked the ball effectively by managing to get three balls inside the 20.

Townsend says representatives from around the NFL were in attendance.

He was arguably the best player last season, getting the struggling Gator offense off the field with good field positioning for their defense. His play across the years and the future NFL combine makes him hopeful that he gets drafted.

Townsend played multiple positions in high school, not starting a game until his second year. When he realized he could play at the next level, he knew he had to take the opportunity.

The punter highlights how valuable the position is and how field position is a huge factor in determining who wins games. He says he does not regret anything from his time in Gainesville.

Sports Journalist @ESPNGainesville, @VAVEL, @VAVEL_USA, @WUFTNews. Telecom at @UF. Miami Aficionado. Views are my own. RT's ≠ endorsements.
Previous History Was Made in the 2018 Australian Open
Next Santa Fe Saints Softball Season Starts Off With a Bang