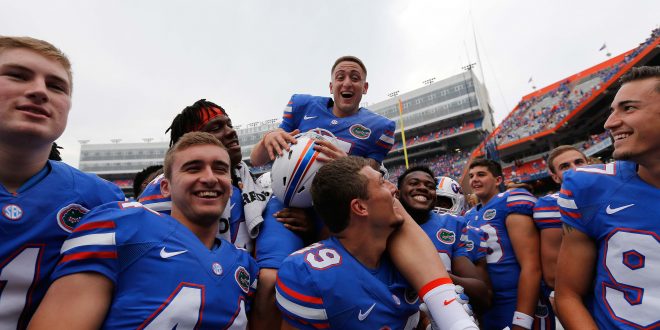 Florida kicker Eddy Pineiro is hard at work preparing the NFL Draft. The redshirt-junior announced in December that he would be leaving school early to enter the draft.

Pineiro was one of the most accurate kickers in Florida’s history. The redshirt-junior had a 94.4% success rate in the 2017 season. In two seasons with the Gators, he set school records.  He earned an 88.4% field-goal percentage. Pineiro finished out his final season completing 16 straight field goals.

Pineiro announced on Twitter in December that he would not be returning next season.

I will not be returning for my senior year and will be declaring early for the 2018 NFL draft. Thank you Gator nation and the Universty of Florida for a great 2 years from me and my family! @GatorsFB

Pineiro said his experience as a Florida Gator was something he will remember forever. Throughout his two seasons, there was quite a bit of turnover and turmoil, including the firing of Jim McElwain.

Pineiro said the changes were difficult. McElwain visited his home to recruit him. Pineiro said he made the decision to switch his commitment from Alabama to Florida after this visit. The South Florida native also liked that attending Florida would allow his family to travel to see him play more often.

Pineiro has hired Drew Rosenhaus as his agent. He believes that he could be drafted between the third and fifth rounds. Growing up in South Florida, Pineiro said it would be a dream come true to play for the Miami Dolphins. He is currently waiting to see if he receives an invitation to the NFL Combine. He is also working towards Pro Day.

Born and raised at the ballpark! Typically quiet- until it comes to sports. I'm a South Florida native with a passion for baseball nearly as strong as my faith. Grew up in garnet + gold, turned out sporting orange + blue. Likely to be found with a camera. And yes, I take food pictures.
@victoriarossman
Previous Kevarrius Hayes Key to a Gator Win Against Georgia
Next SEC Match Up Arkansas at Texas A&M