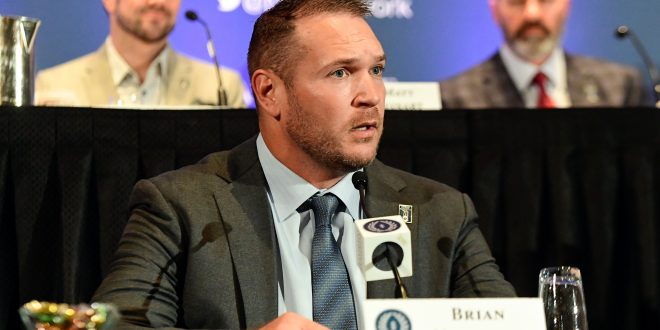 Brian Urlacher Added to the Football Hall of Fame

A great Chicago Bears linebacker, an All-American at the University of New Mexico, and now he has one more thing to add to his resume: a football Hall of Famer. Brian Urlacher, 39, is the 28th Chicago Bear to be inducted into the Hall of Fame and on his first ballot. His 13-year long career with the Bears was more than just a career for him. The Bears were his entire life.

When talking about the nomination, Urlacher spoke about how the honor was humbling to him.

Urlacher joins seven others in the 2018 Hall of Fame class, including Randy Moss, Terrell Owens, Ray Lewis, and Brian Dawkins. However, some wondered if both Lewis and Urlacher would be inducted as both played the same positions at roughly the same time.

Urlacher changed the way people thought of the middle linebacker, as he made opposing offenses struggle in his wake. And if that’s hard to believe, here’s some stats that might change your mind. Urlacher has had a total of 1,353 tackles, 41.5 sacks and 22 interceptions in his 13-year long football career. He was named to the NFL Pro Bowl team eight times and was a four-time First-Team All-Pro.

Urlacher is the first player from the University of New Mexico to be in the Hall of Fame.

Lots of teammates reacted to the news of Urlacher’s new honor. Thomas Jones, who played with Urlacher as a running back for the Bears from 2004 to 2006, showed his enthusiasm for his former teammate on Twitter.

@BUrlacher54 One of the greatest linebackers and teammates to ever play the game of football. Proud to have shared the field with you my brother. I wish you all the best today as you are a 1ST BALLOT HALL OF FAMER! #2000NFLDraftClass #BearTFDown https://t.co/4DkZz6BSrJ

Former teammate Jason McKie got in on the congratulations as well. He played for the Bears from 2003-2009, which was during the time Urlacher was there.

And fans and other sports names chimed in with their opinions as well. All seemed to be in good favor of the former linebacker and now, football Hall of Famer.

Courtney Mims is a junior telecommunications major at the University of Florida. She enjoys covering all Gator sports and drinking gallons of Starbucks coffee while doing so.
Previous Pro Football Hall of Fame: Brian Dawkins
Next Ray Lewis: The NFL’s Newest Hall of Fame Member