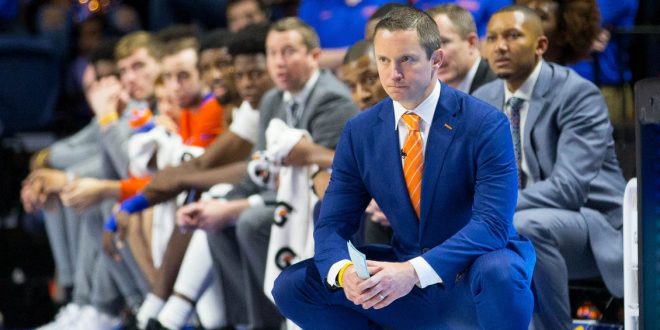 Florida Looks To Get Back On Track Wednesday Night vs. LSU

The Florida Gators (15-8, 6-4) fell out of the AP Poll on Monday for the first time since January 15. The Gators have been outscored 76-45 in the second halves of their last two games vs. Georgia and Alabama and are shooting 35% from the field and 28% from beyond the arc over that span. On Wednesday night, Florida will look to avoid their first three-game losing streak since December 6, when the Gators dropped consecutive games to Duke, Florida State and Loyola-Chicago.

The LSU Tigers are 4-6 in the SEC and have lost 5 of their last 7 games. Their only two victories since January 13 came against Texas A&M (Jan. 23) and most recently Arkansas (Feb. 3) at home. LSU is ranked 30th in the NCAA in offensive efficiency and 37th in effective field-goal percentage, but struggle on the defensive end of the floor. The Tigers have given up at least 90 points in two of their last three games and rank 147th in defensive efficiency, the third-lowest of any SEC team. Wednesday night’s game tips-off at 6:30 p.m. in Gainesville on the SEC Network.

#Gators down to an 8-seed in Joe Lunardi’s latest bracketology.

Freshman guard Tremont Waters and senior forward Duop Reath make up LSU’s most dynamic offensive duo. The two are combining for 29.3 points per game on 49.4% shooting from the field. Waters is the team’s leading scorer and passer, averaging 15.3 points and 4.9 assists per contest on 36.9% shooting from long-range. The freshman went for 27 points, hitting 7 shots vs. Arkansas in a 94-86 win on Saturday night. Waters has scored at least 17 points in 11 games this season and is in range the second he crosses the halfcourt line.

Duop Reath is a 6’11”, 244-pound big man who has become vital in the Tigers’ offensive gameplan. Reath has a versatile offensive game, which includes a mid-range and three-point shot. While Reath scored a measly 5 points against Arkansas, in the four games before that, he averaged 22.8 points, 7.3 rebounds and 1.3 blocks per game on 64.8% shooting (35-54) from the field against Vanderbilt, Texas A&M, Auburn and Tennessee. Reath has increased his field-goal percentage by 5.6% and his three-point percentage by 14.8% from just a season ago.

While the Gators live and die by the three, they’ll need to find a way to get to the basket vs. the Tigers on Wednesday. LSU is allowing opponents to shoot an SEC-worst 54.2% from two-point range. 55.6% of opponent’s points against the Tigers have come in two-point range, also an SEC-worst. The Gators are one of the 70 worst teams in the country in two-point percentage and must make adjustments if they want to come away with a comfortable victory over LSU on Wednesday night. In Florida’s last three games, Jalen Hudson, Chris Chiozza and KeVaughn Allen are a combined 19-52 (36.5%) from within the arc.

Chris Chiozza was named to the USBWA’s Bob Cousy Award Mid-Season Watchlist on Monday evening. The award is given to the top point guard in the nation and is named after the former Holy Cross and Boston Celtics great Bob Cousy. Chiozza was one of 10 point guards named to the list including Trae Young (OU), Joel Berry II (UNC), Tra Holder (ASU), Devonte Graham (KU), Keenan Evans (TTU), Javon Carter (WVU) and Jalen Brunson (Nova).