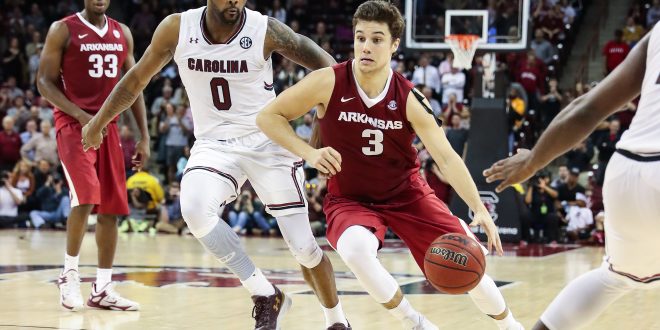 The South Carolina Gamecocks and the Arkansas Razorbacks will take the court tonight in Fayetteville. The Gamecocks will look to avoid a four-game losing streak, while the Razorbacks will try to keep a near-perfect home record intact.

The Gamecocks are trying to avoid their fourth consecutive loss. Their last few games have come down to the final minutes. After coming up short against Mississippi State and Texas Tech, South Carolina needs to push through those last minutes of play and stay communicating.

South Carolina currently has a 4-6 record in the SEC. However, two big conference wins for the Gamecocks came against Florida and Georgia, both of whom the Razorbacks have lost to.

Their defense will be an important factor. After giving up 80+ points in their last two games, the Gamecocks will look to hold off the Razorbacks.

The Razorbacks have won three of their last four games. They are also 4-6 in conference play. Arkansas is coming off a loss against LSU over the weekend. They should be happy to be playing at home. The Razorbacks boast an 11-1 record in Fayetteville.

Players to watch include Jaylen Barford and Daryl Macon, who combined make an impressive guard combo. Barford and Macon are each in the top 10 scorers in the SEC. They are the only pair to do so from the same team.

Born and raised at the ballpark! Typically quiet- until it comes to sports. I'm a South Florida native with a passion for baseball nearly as strong as my faith. Grew up in garnet + gold, turned out sporting orange + blue. Likely to be found with a camera. And yes, I take food pictures.
@victoriarossman
Previous Florida Looks To Get Back On Track Wednesday Night vs. LSU
Next SEC Preview: Rebels host Missouri