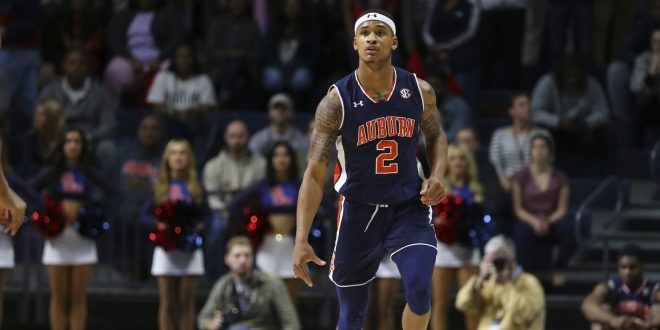 Coming into the season, many would’ve assumed Texas A&M to be the 8th ranked team in the nation and Auburn to be unranked coming into this game. Instead, the narrative has been flipped. The Tigers have been on a roll this season, winning 9 of their 10 SEC contests thus far. Auburn’s No. 8 ranking is their highest since 2000. The Aggies, on the other hand, are 4-6 in the contest and 15-8 on the season with 2 losses in their last 4 games. Auburn and Texas A&M are set to tip-off at 9 p.m. on ESPN2 at Auburn Arena.

Keys To The Game (Texas A&M)

1. Win the Battle of the Boards: Coming into the game, Texas A&M is ranked 18th in the NCAA in offensive rebounding percentage. Robert Williams and Tyler Davis are ranked 1st and 3rd respectively in rebounds per game in the SEC. The Aggies also feature the 6th-tallest team in all of college basketball. On top of all of this, Auburn has allowed the 4th-worst offensive rebounding percentage to opponents during conference play. If TAMU wants to start out on the right foot, they should send Williams and Davis to the offensive glass whenever a shot goes up.

2. Don’t Force Three-Pointers: Texas A&M is one of the 80 worst teams in the country in three-point percentage. The Aggies are shooting an abysmal 28.6% from beyond the arc during conference play. TAMU’s game is, and should be, to pound it inside to their two future NBA big-men. Texas A&M put up 83 points in their most recent victory against South Carolina on only 7 made three-pointers. The Aggies shot 62.9% within the arc in that contest.

3. Alter Shots and Fill Passing Lanes: Texas A&M is averaging 7 blocks and 6 steals per game in their last three games. When Williams, Davis and Trocha-Morelos pack the paint and deter shots at the rim, the Aggies defense looks at their best. While TAMU hasn’t been great in their transition offense this year, turnovers and blocked shots can swing momentum their way in a tough road outing.

Keys To The Game (Auburn)

1. Don’t Overthink The Matchup: Yes, Texas A&M has won their last two games and have looked much better in those two tilts than in January, but Auburn is still the better team. The Tigers have won their last five games by an average margin of 15.6 points per game. They’ve also scored at least 90 points in 3 of those 5 games. The Tigers can’t be scared of the Aggies’ size.

2. Run The Floor: Auburn plays at the quickest tempo in the SEC and loves to get up and down the floor. While Texas A&M will have their size advantage, the Tigers can get around that by breaking out a quick outlet pass to their speedy guards off of every defensive rebound. Auburn has done a terrific job of getting to the foul line this season and rank 1st in the conference in free throw attempts per field goal attempts. At worst, Auburn can continuously get to the line as Texas A&M tries to slow their momentum with fouls in transition.

3. Auburn For Three: Texas A&M is allowing SEC opponents to score 33% of their points from beyond the arc, the third highest in conference play. Auburn is shooting a ridiculous 40.9% from long-range during conference play. The Tigers are 10-0 this season when they make 10 or more three-pointers in a game. This is a perfect strategy for when the Aggies pack the paint with their talented big-men.

DYK | Auburn is one of two teams in the @SEC with all three of its backcourt players averaging over 1️⃣2️⃣ points per game. #WarEagle pic.twitter.com/BFu996mX82