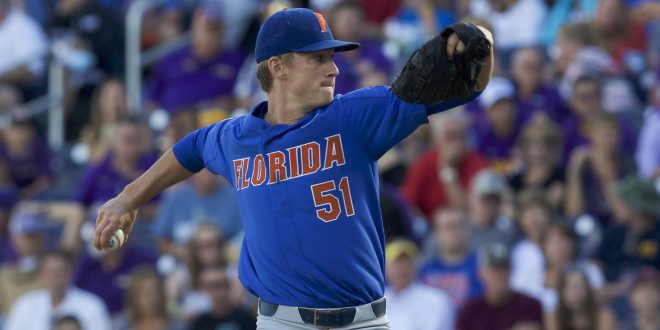 As reigning national champions, the Gators will open the season ranked No. 1 in the Baseball America Top 25, as well the USA Today Coaches Poll. It comes to no surprise with their incredible talent lined up for the 2018 season. Among that talent lies three dynamic pitchers: Brady Singer, Jackson Kowar, and Tyler Dyson.

The Season of Singer

Brady Singer is in the spotlight once again as the Gators season opener approaches. As a junior pitcher, he is projected to be the No. 1 pick during June’s draft. Florida head coach Kevin O’Sullivan plans to start Singer for the Gators Friday night game, which was filled by junior Alex Faedo last season. A trend seems to be occurring, as Faedo entered last season as a potential early pick for the first round of the draft as well.

The Season of Singer: #Gators Starter in the Spotlight

After Singer learned from Faedo for the past year, he ended last season 9-5 with a 3.21 ERA and 129 strikeouts in 126 innings. Singer even set a College World Series Finals record to end the 2017 season. In Game 1 against LSU, he had a 4-3 win with 12 strikeouts.

Singer looks forward to a dynamic lineup, as well as another great season.

A junior, Jackson Kowar is set to start pitching in Florida’s games on Saturdays. He finished last year tied for the best single-season record in school history with a 12-1 record.

Kowar’s first relief appearance of the season was during Game 2 of the CWS Finals against LSU. He pitched 1.2 scoreless innings, earning his first career save, which clinched the first national title in Florida history. While in his lone start at the CWS, Kowar had 11 strikeouts against TCU, setting a career high.

He posted an admirable 0.7 flyout-groundout ratio (89 flyouts, 126 groundouts), along with leading the SEC with 12 wins.

Kowar hopes to be a constant in the pitching rotation for this season.

Tyler Dyson has a set role as the No. 3 starter on Sundays for the Gators this season. Dyson ended his freshman season with a 4-0 record and 3.23 earned run average in 39.0 innings.

During Dyson’s second start of his career last season, he clinched the College World Series Finals game against LSU. He pitched six innings only allowing one run, earning a win.

Singer believes Dyson deserves to have a set start in the rotation due to his excellent performance last season.

Watch the Gators hit the field Friday, February 16th at home against Siena.