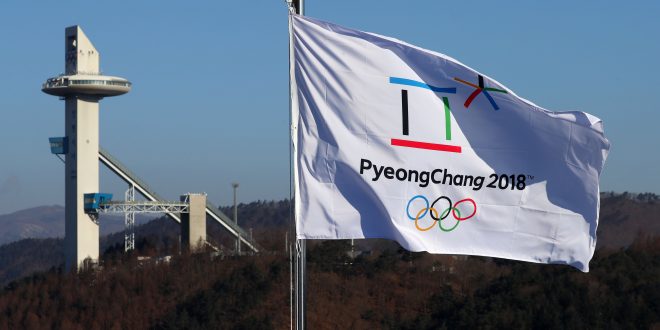 Feb 6, 2018; PyeongChang,KOR; A PyeongChang 2018 flag whips in the wind at the Olympic Sliding Centre during a luge training session in advance of the PyeongChang 2018 Olympic Winter Games. Mandatory Credit: Rob Schumacher-USA TODAY Sports

The 2018 Winter Olympics has finally arrived to Pyeongchang. The opening ceremony will take place tomorrow with Mike Tirico, who is taking over for Bob Costas, and Katie Couric.

.@GreatestShowman's ‘This is Me’ captures the unique spirit inside every Olympian. Watch the ad you just saw on the #SuperBowl on NBC! #BestOfUS

Erin Jackson, a Gator graduate, qualified for the U.S. speedskating team in the 500 meters back in January. She is a first-time Olympian, qualifying after just four months on ice. Jackson finished behind veterans Brittany Bowe, a native from Ocala, and Heather Bergsma.

Jackson, a 25-year-old skater, went 39.22 in her first heat and clocked a 39.04 in her second run. She becomes the third African-American to make the U.S. speedskating team for the Olympics.

Bowe had the fastest time over two heats Friday night. She was quicker in her first run around the big oval, clocking 37.95 seconds, and her clocking a 38.18 in her second run.

Joey Mantia, also an Ocala native, will make his third winter Olympics appearance. Mantia finished in first place during his race with a time of 146.35.

The Olympics started on Thursday, February 8 and will last until Sunday, February 25. You can catch coverage of the games on ESPN 98.1 FM.