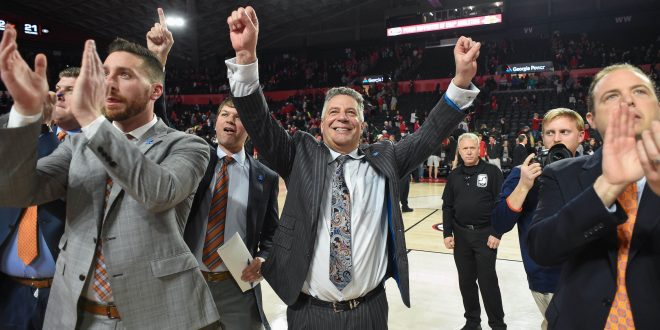 Something you haven’t heard in while: The Kentucky Wildcats are underdogs tonight when they play in Auburn Arena. Since 2010 the Cats have been favored in every single match up; home and away. Its an unusual position for John Calipari and his squad of elite talent. Although his team is once again composed of top-tier prospects they have failed to find consistent chemistry while on the floor. Kentucky, who entered the season ranked No. 5 in the country, is trending downward. They have dropped their last 3 games (Mizzou 69-60, Tennessee 61-59 , Texas A&M 85-74) and face one of the most dangerous offenses in the country tonight. Auburn is chalk full of shooters and average over 88 points a game. Expect Kentucky to dominate the paint. They have a huge size advantage and will most likely look to get easy buckets in the post. The bigs will certainly cause issues for the Tigers. Auburn earned their third loss of the season last week largely due to their height disadvantage. In the game the Tigers lost to Texas A&M they were out-rebounded 33-22.

Can the Cats Slow Down Auburn’s Explosive Offense

Kentucky brought in another top class this past offseason, but they have struggled shooting all season. Calipari hasn’t been able to match the elite offensive production from last year’s sharpshooters, De’aaron Fox and Malik Monk. The Cats don’t have a single 40% 3-point shooter on the roster. While Auburn boasts three. In order to win, Kentucky must play 40 minutes of physical basketball.

Although Kentucky has struggled this season, 6-6 in conference play, they are still a lock to make March Madness. The key for Kentucky to pull off the upset will be perimeter defense. If they allow Auburn to shoot open shots it could be a long night. The Cats need come out with energy and play bully ball. The Auburn Arena will be packed tonight. It will be extremely difficult to steal a game from the Tigers, who are having their best season in 18 years. Bruce Pearl has the Tigers in first place of the SEC, which is something no one expected at the start of the season. Both teams are looking to gain crucial momentum heading into the SEC Tournament.

Tipoff is set for 9 p.m. Wednesday.