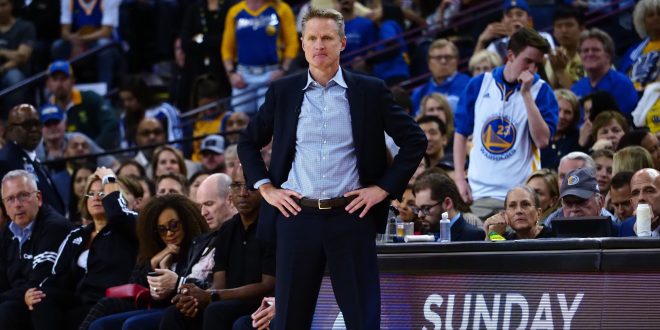 When a team has made it to the NBA Finals three years-in-a-row, a regular season game might not matter to them as much.

That may have been the case on Monday night when Golden State Warriors head coach Steve Kerr let his veteran players coach the team against the Phoenix Suns.

During different points in the game, Kerr was seen handing over the coaching duties to players Andre Iguodala, David West and Draymond Green. The strategy may have worked as the Warriors easily defeated the Suns 129-83.

The decision to let his players coach hasn’t been received well by everyone as Kerr has received some criticism for his decision.

Kerr said that allowing his players to coach wasn’t that big of a deal but has been surprised at the amount of backlash he has received from it.

The coach explained his decision by saying that he wasn’t reaching his player for the last month and just wanted to do something different.

Reaction Around The Association

Not every coach around the league has the luxury of letting their players coach themselves.

Cleveland Cavaliers head coach Tyron Lue said that he wouldn’t be open to letting his players coach because some critics have said that they coach themselves already.

“I wouldn’t do that,” Lue said. “They already said that Lebron’s coaching the team anyway. If I give him the clipboard, they’re really going to say it.”

ESPN NBA analyst Stephen A. Smith said that Kerr allowing his players to coach during the timeouts was a “wise move” enabling the players to motivate each other.

The Warriors are coasting through another regular season as they find themselves with a 44-13 record and the first seed in the Western Conference.