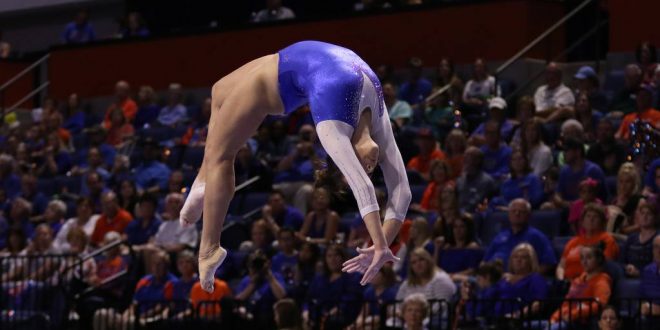 The fifth ranked Florida gymnastics team traveled to Athens, Georgia Friday night where they took down 14th ranked Georgia by a score of 196.950 – 196.125.

Florida started the night off on bars. The Gators have shown significant improvement on bars throughout the season. UF scored 49.500 – their highest score on bars on the year. Alex McMurtry led the Gators, earning a near-perfect 9.975. The Bulldogs were on vault. They were led by Sydney Snead, who scored a 9.900. However, mistakes from Marissa Oakley and Sabrina Vega lowered their average score. Florida led the first rotation by 0.45.

For the second rotation, the Gators moved to vault. Alicia Boren tied her collegiate-high score, earning a 9.950.  McMurtry and Rachel Slocum also had strong performances. With Georgia on bars for this rotation, there were some struggles. Natalie Vaculik led the team with a 9.850; however, an 8.250 for Marissa Oakley significantly lowered the average score for the Bulldogs.

The third rotation had Florida on floor. Rachel Slocum completed an almost-perfect routine, scoring her collegiate-best 9.950. Alex McMurtry performed her season-debut floor routine and scored a 9.925. The Bulldogs were on beam, where they were led by Marissa Oakley with a 9.950.

The fourth and final rotation had the Gators on beam. Freshman Alyssa Baumann led the Gators with a 9.900. Nicole Webb made her beam debut, scoring a 9.725. Georgia moved to floor for this rotation, where a perfect routine from Sydney Snead would earn her the only perfect 10 score of the night.

The Gators are back home next Friday for their Link to Pink meet against Arkansas.

Born and raised at the ballpark! Typically quiet- until it comes to sports. I'm a South Florida native with a passion for baseball nearly as strong as my faith. Grew up in garnet + gold, turned out sporting orange + blue. Likely to be found with a camera. And yes, I take food pictures.
@victoriarossman
Previous Florida Aiming For Win In Saturday Showdown with Vanderbilt
Next Preview: Gator Softball Travels to Louisiana-Lafayette