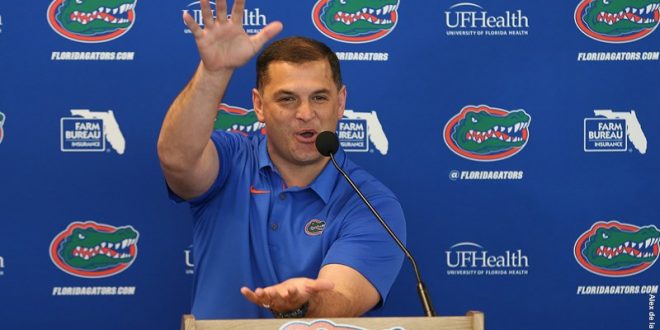 Billy Gonzales is Back as Co-Offensive Coordinator and Receivers Coach

Billy Gonzales, a former Gators receivers coach, returns as co-offensive coordinator and receivers coach. New Head Coach and former Gator Offensive Coordinator Dan Mullen made the call to offer him the opportunity to come back. Gonzales returns to Florida after two national championships and stints with LSU, Illinois and Mississippi State. Despite coaching with Mullen as far as 18 years ago, he did not coach with Mullen from 2010-12.

"The ultimate goal here is to win championships." — @CoachBillyG

Gonzales opened his press conference saying how excited he is to be back with the program.

Over the last 18 years, he has built a great relationship with Hevesy and Mullen since their first days at Bowling Green State University. The coaching staff eventually transitioned to Utah before becoming Gators in 2005. Gonzales says that Mullen is not afraid to let you “think outside the box” as a coach. With the comfort of the job, he described returning as a coach at Florida as a “let’s go” experience rather than asking his family for their opinion. Although he and his family have been gone from Gainesville since 2009, his daughter was happy to be back too.

Gonzales is forever a part of Gator history after taking part in two of the programs national championships. Percy Harvin, his strongest recruit according to Scout.com, is a Gator great and a large part of those years at the top between 2005-09. With Dan Mullen at offensive coordinator, they built a powerhouse in the SEC with one of the greatest ever in Tim Tebow at quarterback. Despite being successful, former Head Coach Urban Meyer left for Ohio State. Gonzales and company would not follow, however, went there separate ways in college football. At the end of the day, the assistant coach says the Florida atmosphere is special.

Sports Journalist @ESPNGainesville, @VAVEL, @VAVEL_USA, @WUFTNews. Telecom at @UF. Miami Aficionado. Views are my own. RT's ≠ endorsements.
Previous McElwain Hired as Receivers Coach at Michigan
Next Coach Hevesy Back With His “Brothers”