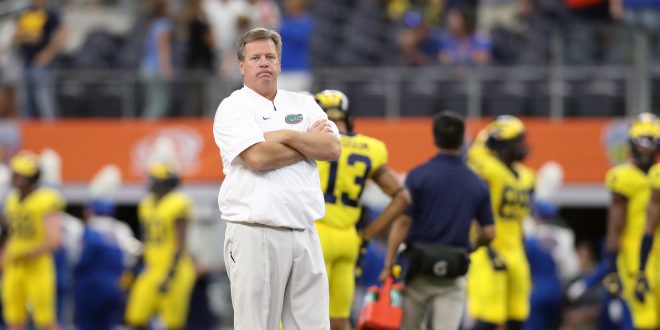 McElwain with the Wolverines

He signed as an assistant offensive coach with the Wolverines. According to Chris Low of ESPN, McElwain says his focus will be coaching receivers, but he is also going to be assisting with offensive coordinating and weekly game planning. The Former Gator coach is set to replace Dan Enos, who was hired in early January but quickly decided to leave before the month was up. Now, Enos coaches quarterbacks at the University of Alabama.

Jim McElwain: "I'm excited to get back into it and am looking forward to going there and learning and helping Michigan get better." https://t.co/0MuNO829Aa

McElwain started his college coaching career in 2007 as offensive coordinator for California State University, Fresno. A fairly successful season with the Bulldogs led to his position as offensive coordinator and quarterbacks coach for the Crimson Tide from 2008 to 2011. During his time in Alabama, the team won two national championships. His first head coaching job was with Colorado State from 2012 until he left for Florida for the 2015 season.

Despite McElwain’s offensive experience on paper, many college football fans question Michigan’s choice to hire him for the offense.

How can you have watched McElwain’s offense and then give him a job https://t.co/AU8Y28YM4m

His last season with the Gators tainted McElwain’s reputation, especially on the offensive side of the ball. Florida began 2017 in the NCAA top 2015 and quickly dropped to a 3-4 record after a devastating loss to UGA Week 9. It was the first time since 1986 that the Gators went into November with a losing record, according to Garry Smitts of Jacksonville.com.

Still, others are still confident in McElwain’s ability to coach offense. Last season, Michigan relied heavily on a top-ranked defense. Fans hope his presence will help Michigan to excel offensively as well.

Sounds like Jim McElwain will be Michigan’s 10th asst coach. I personally think he’s a great hire. Yes his offense was not good during most of his time at UF, but he also had no QB. Go look at the statistics when Will Grier was under center. You need a QB to have a successful O

I grew up in the Washington, DC area and now I'm a Gator. I'll always be learning more about myself, others and the world around me. And I'll always be talking about sports.
@kelsey_godman
Previous Tiger Woods Looks Ahead After Missing Genesis Open Cut
Next Billy Gonzales is Back as Co-Offensive Coordinator and Receivers Coach