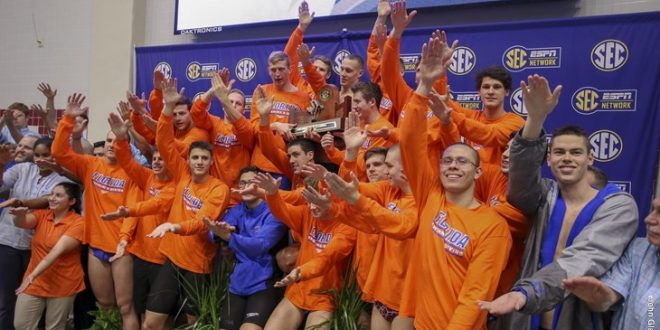 The No. 3 Florida Men’s Swimming team won the SEC Championship on Sunday in College Station, Texas. This championship marks the sixth-consecutive SEC title for the men’s team and 39th overall in program history.

The Gators got off to a hot start on the first day of competition, winning two titles in the 200 meter medley and 800 meter free relay. They finished the day in fourth place overall.

On the second day of the meet, the Gators took control of first place in the standings despite only winning one title on the day: the 200 individual medley (IM) won by Senior Caeleb Dressel.

The Gators maintained their lead on Day 3 as Senior Jan Switkowski took home the title for the 100 fly, while Sophomore Khader Baqlah recorded the fastest time in the nation in winning the 200 free.

The Gators built their first-place lead even further on Day 4 with two more titles. Dressel and Redshirt Junior Bayley Main won the 400 medley relay and Dressel broke the Florida, American, NCAA, US Open, SEC Meet, and pool record for the 100 breast event.

On the final day of competition, the Gators closed out strong, winning three more titles to close out the meet. Senior Mark Szaranek set a school record with his 1:51.86 time in the 200 breast, earning his only individual first-place title of the meet. Caeleb Dressel earned another individual title with his SEC Meet record 41.01 time in the 100 free. He would later break that time in his 40.87 split in the 400 free relay, with which the Gators earned their tenth title of the meet and clinched an SEC Championship.

In total, the Gators scored a dominant 1,237 points, which was 243 points better than the next best team.

For all that and more, @caelebdressel
is your SEC Male Swimmer of the Meet! He also won this season's Commissioner's Trophy!#IsThatGood? #GoGators #SECSD18 pic.twitter.com/NLQ7kImdZX

Improvement for the Women

The Gator Women’s Swimming team also competed at the SEC Championship Meet, finishing 7th overall in the women’s standings with 619 points. Head Coach Gregg Troy spoke about the difference in the team from the year prior.

“The women were tremendously better than year and we are only going to get better because we are a young team,” Troy said.

The Gators return home to compete in the Last Chance Meet on Feb. 24-26.