The Hornets are District Champions and have a district record of 8-0. They are currently 22-5 on their season with 10-1 record at home and 9-1 away. They are coming off a 79-42 district win against Hilliard.

Hawthorne averages 67.2 points per game. They also average 28.8 rebounds per game and 9.7 assists per game.

Hawthorne Head Coach Greg Bowie says that anyone coming to the game Thursday night is going to see an electric team.

The Trojans are coming off a  loss to Madison County, 69-57, in the district championship game. Hamilton County is currently 16-12 on their season with a 9-2 home record and 5-7 away. Hamilton County averages 63.6 points per game.

Sydney is a senior studying telecommunications with a specialization in sports media at the University of Florida. She is a multimedia sports reporter for ESPN 98.1 FM/850 AM WRUF and WUFT-TV.
Previous Alabama – Auburn Basketball Preview
Next Marcell Harris: Path to the draft 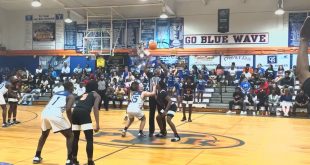 By: Jennifer Blardonis and Andrea Castiblanco The 7-4 Hawthorne Hornets took on the 11-10 P.K. …