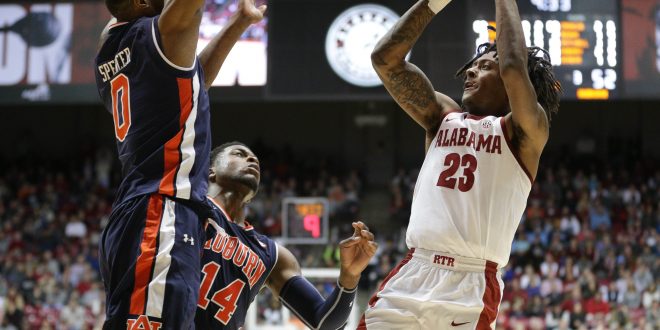 University of Alabama Crimson Tide travels to take on the in-state rival Auburn Tigers. Both teams are coming off a road loss and are looking to bounce back going into Wednesday night’s rematch. The two met earlier in the season, where the Crimson Tide came out victorious with a final score of 76-71. Round 2 of Alabama-Auburn tips off at 8:30 in Auburn Arena.

Alabama’s Shot At an Upset

The Crimson Tide are looking for a chance to get back on the winning side after losing 10 points to Kentucky last Saturday.

With Collin Sexton back in the lineup after an abdominal injury in late January, the standout freshman will be making his 24th start in an Alabama uniform. Sexton currently ranks third in the SEC scoring average (18.1 ppg) and tops the team in assists per game (3.5). Sexton will also be reunited with former high school teammate Jared Harper for a point guard battle. Harper ranks 2nd in the SEC averaging 5.8 assists per game and is third on the team averaging 13.5 points per game. The two played together for three years at Pebblebrook High School in Mableton, Georgia.

Head Coach, Avery Johnson comments on the maturity of his young team and how they continue to grow.

Coming off of arguably their worst half of the season in Saturday’s matchup against the Gamecocks with a final score of 84-75, the Tigers have yet to suffer back-to-back defeats this year. Without starting forward Anfernee McLemore who suffered a season-ending ankle injury, Auburn’s post-players will see more minutes. Leading scorer Bryce Brown also missed practice last week due to a bruised foot. Brown is expected to play in Wednesday’s game.

The Auburn Tigers remain at the top of the SEC Basketball Conference and have a solid lead in the standings. With two weeks remaining in the regular season, the Tigers could possibly clinch the regular season title.