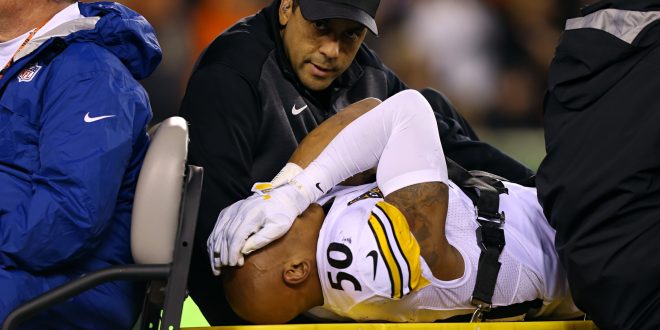 Pittsburgh Steelers LB Down, But Not Out

Pittsburgh Steelers LB Ryan Shazier still has hope return to play in the NFL.  Shazier, a 2 time pro-bowler and lead tackler on the team had a potentially career-ending injury on Monday Night Football. December 4th the Steelers were playing against the division rival Cincinnati Bengals, on a 2nd down Shazier made a tackle with the crown of his helmet. The tackle looked like a regular play, nothing crazy that sent either player flying away. Until Shazier placed his hand on his back, then rolled over and his legs dangled lifelessly.

Shazier’s injury was serious after stories surfaced of him still not gaining feeling in his legs days later. Three days after the injury, Shazier went under the needle and had spinal stabilization surgery. Reports stated, “months of recovery will be needed before he even considers a return.”

Thank you for the prayers. Your support is uplifting to me and my family. #SHALIEVE

Initially, it looked like Shazier would be lucky to ever feel his legs again. But after plenty of rehab and working with doctors in Pittsburgh, things are progressing.

Fast Forward to February, Shazier is now able to stand up on his own but still maneuvers in a wheelchair. With the love and support of his family and friends, it looks like things are going to be okay for Shazier. Nothing will ever be the same but it seems best case scenario for his situation.

February 20th, Shazier for the first time spoke openly about the injury. Shazier went into detail about all the support but mainly how he planned on moving forward in his career.

“Bro like I GOTTA get it” Shazier explains. Shazier’s back gave out but his heart definitely stepped in. The Steelers lead tackler is determined to come back to the game and even get voted into the Hall Of Fame.

Shazier has come a long way and still has a long way to go. But one thing is for sure, he doesn’t have a quit in his heart and refuses to let his teammates down.