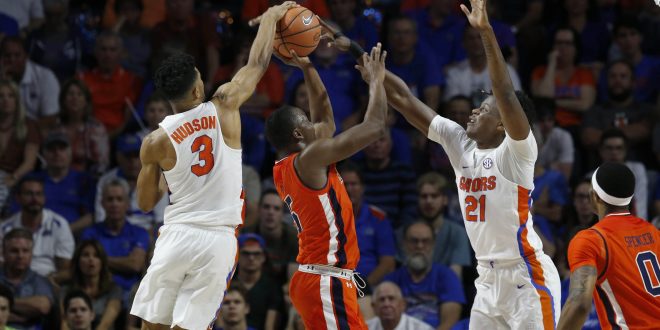 The Gators opened an early lead, but the Tigers stayed within striking distance for a majority of the contest. Auburn took a 64-63 lead with 1:58 left in regulation, but the Gators ended the game on a 9-2 run to secure the victory. Florida forced 16 Auburn turnovers and converted them into 14 additional points. With two games left in the regular season, the Tigers hold a one-game lead in the SEC over the Tennessee Volunteers.

FINAL: #Florida 72 , #Auburn 66. That win should all but lock up the #Gators spot in the NCAA Tournament. KeVaughn Allen finishes with 22 points, Hudson added 19, Chiozza finished with 8 points and 12 assists. Necessary win for Florida.

1.)  Florida Continues to Live and Die by the Three. It’s evident that the Gators play their best basketball when their three-pointers are falling. Florida shot 13-28 (46.4%) from beyond the arc. This opens up many different aspects of their game. The defense is forced to expand which creates open space in the middle of the floor for their guards to drive and generate opportunities. Dontay Bassett got a numerous wide open lay-ups and dunks because of the open space in the middle of the floor. This was simply created as a byproduct of the Gators’ ability to knock down their threes.

2.) The Gators Thrive When They Play With Energy. Mike White’s squad is a completely different team when they get out in transition and play with pace. They started the game with a plethora of energy and jumped out to a 10-2 advantage. They got content with their lead and started to slow the game down, and Auburn tied the game at 15 apiece. The Gators have the ability to run their opponents out of the gym on any given night. It’s all dependent on when they want to give that type of effort.

Head coach Mike White mentioned that the toughest part for the Gators is playing with high energy on a nightly basis.

3.) Auburn Really Misses Anfernee McLemore. He led the SEC with 2.7 blocks per game before suffering a season-ending dislocated ankle and fractured tibia. McLemore was their only legitimate interior defensive presence. The Tigers have now lost two of their three games since McLemore went down with his gruesome injury. While the Gators didn’t dominate in the interior, that’s simply because they have no interior offensive presence. Their three centers average less than 9 points per game combined. McLemore is certainly missed by the Tigers as they head into the final stretch of the regular season.

4.) Dontay Bassett Could be a Key Piece for the Gators Moving Forward. Bassett received the starting spot against Auburn after Kevarrius Hayes allegedly showed up late to a film review session on Friday night. The redshirt freshman certainly didn’t disappoint, posting a career-high 12 points and 6 rebounds (5 offensive) on 5-6 shooting in 24 minutes. He showed an ability to finish his looks around the rim and even hit a relatively contested mid-range jumper. With limited options at center, Bassett will continue to get quality minutes for the Gators.

Bassett discussed how he was so successful grabbing offensive rebounds against Auburn.

5.) The Gators Continue to Crash the Offensive Glass With Authority. While Auburn out-rebounded Florida 41-31, the Gators grabbed 10 offensive boards. This was now their 5th straight game with 10 or more offensive rebounds. The Gators ultimately capitalized with 14 second chance points.

Florida heads to Tuscaloosa to take on the Alabama Crimson Tide on Tuesday night at 7:00 p.m.

Previous Gator Women’s Basketball Out For Revenge Against No. 19 Georgia
Next Gators Softball: Florida Blanks Maryland and Iowa State