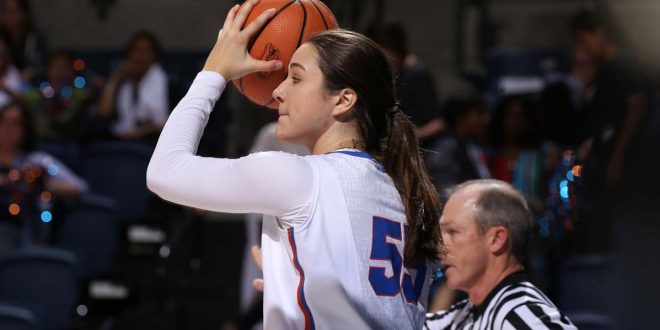 Gator Women’s Basketball Out For Revenge Against No. 19 Georgia

Following a tough 70-42 loss to rival Tennessee Thursday night, the Gators have one more opportunity to upset a bitter rival and ranked opponent Sunday afternoon. In the regular season finale, the Gator women’s basketball team takes on the No. 19 Georgia Bulldogs. The Gators put together a strong performance against the Bulldogs when they met in Gainesville Jan. 29. Florida couldn’t finish the game. They’ll look to finish strong this time around.

The injury status of Florida sophomore guard Delicia Washington remains up in the air. However, there were signs of progression for the Gator starter. She was seen before practice without the boot on her left ankle helping freshman guard Tameria Johnson. Washington wasn’t taking shots or moving around much. The team continues to be in a wait and see mode. What doesn’t help matters is the looming tournament schedule this team has to endure. Following Sunday’s game, they head straight to Nashville for the SEC Tournament, where they will most likely play late Wednesday morning.

Gators head coach Cam Newbauer is playing it safe for his star guard to prepare her for the postseason, a tactic he said following the Tennessee loss he doesn’t usually do. Seeing Washington without the boot Friday is an encouraging sign. She could play Sunday against Georgia, it’s just a matter of how Newbauer feels she can go Sunday and be ready for the start of tournament play.

While the status of Delicia Washington remains up in the air, the role for Tameria Johnson has grown. Johnson made her first career start Thursday night against the Lady Volunteers. She finished her first start with four points, three rebounds and three assists.

Johnson said she had nerves at first but got more comfortable once the game progressed.

Florida senior guard Dee Anderson said she was proud of how her teammate played in her first collegiate start.

It remains unclear if Johnson will start again when the team travels to rival Georgia on Sunday. She said that she will be more prepared for her second start if her number is called.

The absence of Washington also opened the door for walk-on freshman forward Stephanie Brower to see additional minutes. Brower joined the team in the early parts of the season and didn’t see too many minutes. She was normally inserted when the game was already decided. She had her first opportunity to be part of the rotation Thursday night against Tennessee, which was a dream come true for her. Brower played 24 minutes off the bench. She totaled 3 points, 2 rebounds and 3 assists.

Brower said that she was excited to help the team Thursday night.

Brower’s teammates were excited for her to have that chance on the court.

Florida senior forward Haley Lorenzen said she was so proud to see her teammate get a chance to play after all the hard work she put in behind the scenes.

The Gators had their rivals on the ropes in Gainesville in the last meeting. Then, a fourth-quarter collapse by the Gators gave Georgia the edge late and eventually sealed the win for them. The Bulldogs outscored the Gators in the final quarter 31-15. Florida knows that finishing the game strong will be a key to getting revenge.

Lorenzen said that the team has shown to do better the second time facing an opponent.

Newbauer said what he expects both from his team and from the Bulldogs on Sunday.

The Gators close the regular season looking to avenge a disappointing loss just a few weeks ago. They travel to Athens, Georgia to face the No. 19 Bulldogs. The latest chapter of the Florida-Georgia rivalry will tip-off at noon Sunday.