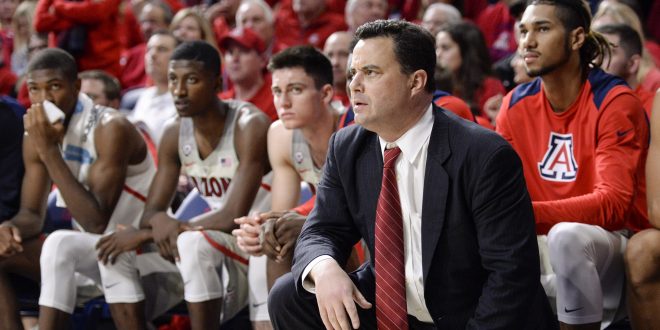 The Arizona Wildcats are looking to move forward after losing without their coach on Saturday. The FBI wiretapping scandal has been hitting the headlines and bringing attention to the Arizona Wildcats. The recent FBI reports suggest Sean Miller, Arizona’s head basketball coach, was involved in the FBI wiretapping scandal. Now, it could have ramifications on his team.

While his status is still being discussed, Lorenzo Romar, is coaching in his place.  Lorenzo Romar, the three-time PAC-12 coach of the year joined Sean Miller’s coaching staff at Arizona in 2017. After the loss against Oregon, Romar discussed how the loss could have to do with the fact that Coach Miller wasn’t there.

The Wildcats went into Saturday’s game with a 3-game-winning streak without their coach after winning 75 to 65 against Oregon State last week. At the half, they were winning 43 to 37 but ended the game by losing in OT with a final score of 93 to 98.

Sean Miller will not coach Arizona tonight at Oregon. Players have been told.

No one knows what will happen from here. For now, he will take Coach Miller’s place but no one, including Coach Romar, knows for how long.

Next, the Wildcats will be playing Standford on Thursday at home.