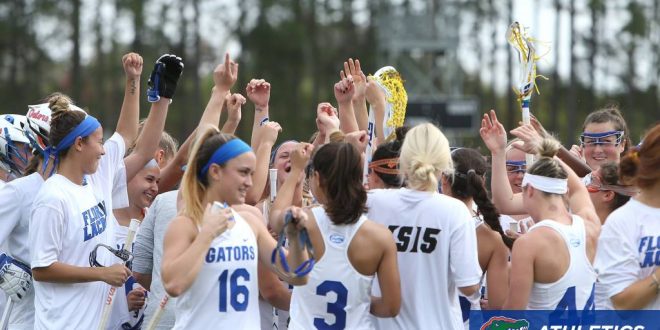 Loyola started off the game with a couple of goals in a row. However, the Gators answered back consistently. After a forced turnover from Sabrina Cristodero, Sydney Pirreca was able to score a goal and tie up the game at 4-4.

With just over a minute left in the first half, Caroline Benitez scored a goal for the Gators to tie it up at 7. However, Loyola would score again to take the lead.

Another HUGE save by @HALEYs_comet_ on a free position attempt with eight seconds remaining in the half!

At the half, Florida trails Loyola 8-7. #GoGators #FLax pic.twitter.com/SSvKWE4fWP

A forced turnover and a score from Florida’s Madisyn Kitell with 1:10 remaining tied the game at 16-16.

Here’s the scoop and score by @MadisynKitell that took us to overtime! #FLax #GoGators pic.twitter.com/svGZfo9bbr

Florida won the game 17-16 in overtime thanks to a goal from Shayna Pirreca.

Shannon Kavanagh and Lindsey Ronbeck each earned a hat trick in today’s game for the Gators. They both ended up scoring more than three goals throughout the game. It was Kavanagh’s first hat trick as a Gator.

The Gators will host Jacksonville on Wednesday night. The game begins at 7 p.m. at Donald R. Dizney Stadium. Follow ESPN 98.1 FM – 850 AM WRUF on Twitter for live scoring updates from the game.

Born and raised at the ballpark! Typically quiet- until it comes to sports. I'm a South Florida native with a passion for baseball nearly as strong as my faith. Grew up in garnet + gold, turned out sporting orange + blue. Likely to be found with a camera. And yes, I take food pictures.
@victoriarossman
Previous Gator Softball Sweeps the Aquafina Invitational
Next Tiger Woods Finishes Strong at Honda Classic, Looks Forward To The Masters

Gators Lax travels to Nashville to take on Vanderbilt

The Gators lax squad travels to Nashville, Tennesse, to take on the Vanderbilt Commodores. The …