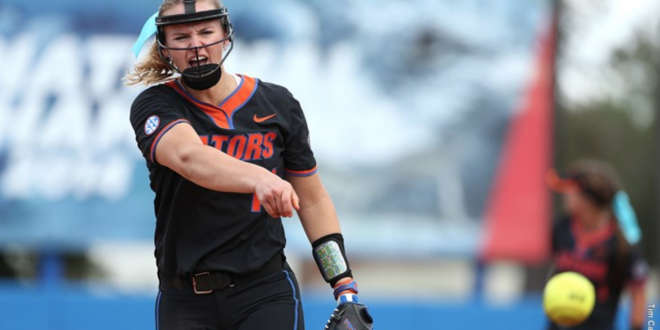 Aleshia Ocasio (7-1) started and ended in the circle, throwing her second complete-game shutout of the season.

Florida wasted no time when it came to scoring. Amanda Lorenz scored Hannah Adams with a double down the left field line to give the Gators an early 1-0 lead.  In the third inning, the Gators scored their final two runs. Kayli Kvistad reached base with a walk. Jordan Matthew’s RBI double to right center brought in Kvistad. Janell Wheaton followed, driving a RBI single to bring in Nicole DeWitt, bringing the Gators to a 3-0 lead.

Iowa State’s best chance  to score came in the top of the fifth. With two outs, Iowa State’s Jackie Chairez came to the plate with Skyler Ramos on second, pinch running for Kaylee Bosworth. Chairez drove a base hit up the middle, which had Ramos rounding third. But UF center fielder Alex Voss threw Ramos out at home plate. The Cyclones remained scoreless.

Ocasio contained the Cyclones, throwing 100 pitches, 75 of which were strikes. Ocasio only gave up six hits during the game.

The Gators dominated Georgia Southern 8-0 in the final game of the series. It was the only game played between the Gators and Eagles (10-4) during the weekend tournament.

Kelly Barnhill pitched the first perfect game of her career, and the seventh individual perfect game and eighth overall, in Florida history. Barnhill is the fifth pitcher to reach this achievement.

It’s the first perfect game since Delanie Gourley’s against Iowa last year at the Judi Garman Classic.  Barnhill also threw her second no-hitter of the weekend, striking out eight of the first nine batters.

“It’s easier to go out and pitch when you know your fielders have your back,” Barnhill said.

Kelly Barnhill … We have no words. pic.twitter.com/yTTpCqgr1y

Florida opened the scoring once again in the first inning, Lorenz’s double to left brought in DeWitt. With one out, the Gators added two more runs. GSU’s second baseman India Davis couldn’t hold on to Matthew’s ball, allowing Lorenz to score on the error. Ocasio’s bases loaded walk brought Kvistad home, advancing the Gators to a 3-0 lead. Sophia Reynoso struck out leaving the bases loaded.

The scoring continued in the second inning. Lorenz’s second RBI double brought in Adams and the Gators came out swinging in the third inning, starting with Adams. Her single combined with shortstop Macy Coleman’s error allowed pinch-runner Jaimie Hoover to score. The Gators were up 5-0, before Lorenz’s three-run home run to right extended the lead to 8-0.

Lorenz only had three at-bats, yet she accounted for five RBI.

Florida catcher Janell Wheaton said Barnhill “felt really comfortable and you could tell that on the mound.”

The Gators will play in the Judi Garman Classic in Fullerton, Calif. hosted by Cal State Fullerton. The first game is set for March 1, against Loyola Marymount at 5:30 p.m. (ET).

“I thought we had a really consistent game at the plate. Good at-bats, some clutch hits, well-executed swings,” Walton said. “Overall, we had a little bit of everything this week. I was really pleased with how our performance was and how we competed at the plate all weekend.”

Kate Venezio is a fourth-year telecommunication-news student at the University of Florida. Kate does it all: Behind the camera she captures emotional moments as a photographer for the University of Florida Athletic Association. She's comfortable being in front of the camera, too. Kate interviews players, coaches, fans and family members for pre- and post-game coverage as a beat reporter for ESPN Gainesville/WRUF-FM. In addition, Kate produces the sports segment for the weekly WUFT News program. There, she's responsible for writing the script in its entirety to include production commands. The presentation includes video highlights and interviews taped and edited, and Kate then live anchors the final package on a daily deadline. In addition, she writes stories for wruf.com where she informs sports fans of local, state, and national trending topics. Kate also utilizes social media as a tool to help get the stories in front of viewers.
@@kate_venezio
Previous Gator Baseball Falls to Miami
Next Gator Lacrosse Defeats Loyola in Overtime