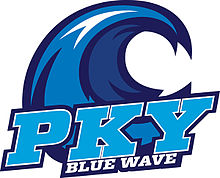 The P.K. Yonge Blue Wave (19-7) and Tampa Carrollwood Day Patriots (27-3) are heading to Lakeland, Florida to faceoff in Class 4A State Semifinal girl’s basketball action. The Blue Wave head to Lakeland for the 16th time; last time being in 2012 as Class 3A champions. On the other hand, the Patriots return for a second straight year after surprisingly making it with a starting five including only freshmen.

P.K. Yonge returns to the Final Four with a quest of winning their fifth state title (1981, 1983, 2010, and 2012). Head Coach Willie Powers says that the team probably played the hardest its played all year after a 51-35 win against University Christian. The Final Four drought is thanks to great competition and having a young team on the court.

Although the team was successful enough to make it this far, Powers says that his team did not show a sense of urgency as high as they did in its previous game.

P.K. Yonge will be leaving Feb. 27 in the morning to go visit The Lakeland Center and become acquainted with the environment. The team will only have the 15-minute warm up to practice on the court before the game on Feb. 28.

Powers wants to emphasize that his team should shoot more baskets in the paint rather than jump shots. The Blue Wave have struggled historically when shooting more three-pointers rather than attacking the rim, according to Powers.

The coach understands that the game has adapted over the years. Players listening to coaches will see teams execute better on the court.

Tampa Carrollwood Day is headed to the Final Four for the second straight year after beating Seffner Christian 66-59 in a 4A Regional Final. The team returns to Lakeland with almost all of its key players returning, including three six-footers. The Patriots enjoy playing a fast-break style and have had a rough time making it back to this point. Illnesses like the flu influenza and injuries left the Patriots losing to Seffner Christian in the District Finals. However, avenging themselves to make it back to states shows the team is getting better.

The Patriots were undefeated at home, with their only losses coming on the road and at neutral sites. Tampa Carrollwood Day did not play any out of state competition this season.