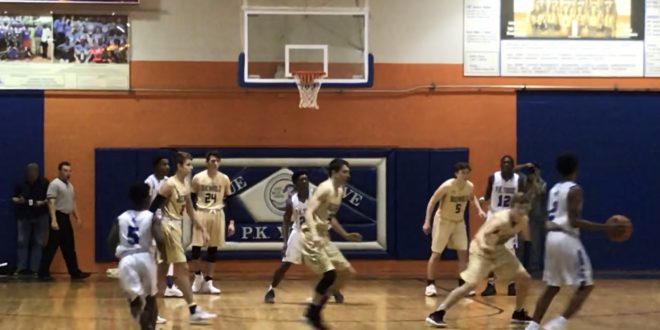 The P.K. Yonge Blue Wave (17-11) will be faced with a bit of a challenge Tuesday night. That challenge comes in the form of horses, well, stallions to be exact. The Jacksonville Providence Stallions, who have a record of 23-5, will travel on down to Gainesville tomorrow at 7 for the 4A Regional Final against the Blue Wave.

The last matchup between these two teams ended up being a win for the Stallions by 13 points. P.K. Yonge Head Coach Billy Blackmon said the team is vastly different this year than last, but they still have a couple of guys who came back this season. His team still has the “bad taste” of what happened last year in their minds, but Coach Blackmon wants to use that in tomorrow’s game.

Blackmon said one of the large keys of the game will be controlling the tempo. With a team that has only lost 5 games, it’s hard to figure out what they do wrong. The Stallions don’t put up a lot of points in their games because they like to work slow. Blackmon said pressuring them to speed up the game was something the Blue Wave can use to win.

Blackmon said that Jacksonville Providence also has some size on the court. This could be an issue for the Blue Wave as the only size they don’t have the same kind of big men on the court. Their biggest player is only 6’3′.

However, it isn’t always about the win for the team. It’s about the future of the players as well. When playing these games and others against big teams, it’s important for the players to get good highlights for their own recruiting purposes.

Blackmon said they go into every game expecting to win, but this kind of thinking is the next level for players. At the end of the day, they all still want to win… and also have some fun.

Courtney Mims is a junior telecommunications major at the University of Florida. She enjoys covering all Gator sports and drinking gallons of Starbucks coffee while doing so.
Previous State Semi-Final Girl’s Basketball: P.K. Yonge vs Tampa Carrollwood Day
Next Tom Izzo, Bridges Family Among Those Involved in FBI Probe