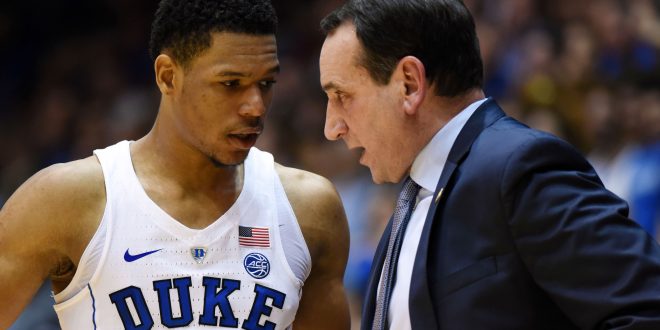 Coach K received a call last Friday informing him of the report. According to the report, Carter Jr.’s mother had lunch with Christian Dawkins. Dawkins was arrested in connection with the FBI’s corruption case in college basketball and is an ASM sports agency associate.

Coach K: “This is Horrible For the Game.”

Speaking about the probe and the effect it has on the game, he criticized how the NCAA defines amateurism.

“This is a horrible time for the game. The game has begged, it has been on its knees begging, for change for years. Sometimes, unless something horrible happens, you just don’t change. We need to take a look at amateurism and look at it probably defining it differently. We have to look through the prism of a 16-year old kid and a family and what they should be allowed and make sure it’s the same thing that is allowed to other NCAA athletes,” he said.

Krzyzewski was informed by Carter Jr.’s mom about the FBI probe.

The documents exposed 20 programs and named 25 players who were part of illegal recruiting violations. Dawkins, one of three arrested in the probe, had lunch with Carter Jr.’s mom in 2016. Carter Jr. was only 16 years old.

Carter Jr. Had 16 Points and 10 Rebounds on Saturday

While other schools held out players named in the report, Coach K and Duke are comfortable playing Carter Jr. Krzyzewski hasn’t stayed up to date on the story from Yahoo and Carter Jr. recorded his 14th double-double of the season in a win over Syracuse.

.@jonmalexander asked Coach K his thoughts on the Yahoo sports story that came out this week: pic.twitter.com/2vqpgX3Ae5

Coach K also says their freshman forward didn’t know about the meeting between Dawkins and his mother.

The most notable amount from the documents is Arizona’s head coach, Sean Miller, who discussed a $100,000 payment with Dawkins on a wiretapped phone. Carter Jr.’s mom, Kylia, had a $100 lunch with Dawkins according to the FBI’s report. She says she had no contact after the lunch with him.