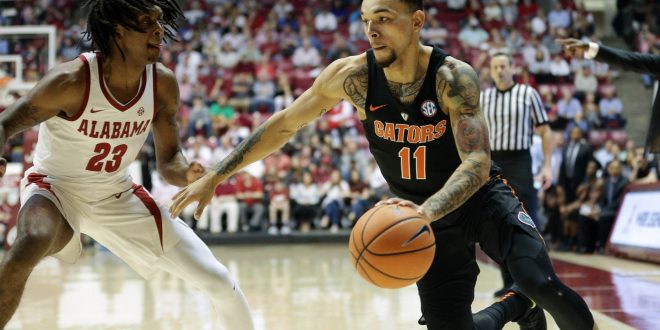 After an 18-point blowout loss to Alabama in early February, Florida returned the favor by taking down the Crimson Tide 73-52. Jalen Hudson took over with 27 points on 9-13 shooting, including 3-5 from beyond the arc. Egor Koulechov also added 15 points on 7-11 shooting. The Gators were extremely efficient on the night, shooting 27-56 (48.2%) from the field.

1.) Alabama Did Not Even Put up a Fight. Florida went up by 19 points at the half, which was the biggest halftime deficit for Alabama at home in the past ten years. Alabama went 4-30 from the field in the first half and missed 19 straight field goals at one point. The Crimson Tide also had 15 turnovers and struggled to convert easy looks around the rim. Florida played very well on the evening, but Alabama simply did not show up to battle.

2.) Florida is Getting Hot at the Perfect Time. The Gators have now won two straight SEC games and look primed to secure a top-four spot and a double-bye in the SEC tournament. They have certainly had an up-and-down season to say the least. Florida beat highly-ranked Gonzaga, Cincinnati and Auburn and sit with 9 Quadrant I victories, which is the third most in the country. However, without a legitimate interior presence and some unexpected losses, they’ve truly been a tough team to pinpoint. Mike White has to be ecstatic that his team is starting to play consistent, high-quality basketball at the right time.

#Gators now have 9 Quadrant I wins. That's the 3rd most in the country behind Kansas (11) and North Carolina (10).

3.) Alabama is Playing its way out of the Tournament. The Crimson Tide have now lost four straight contests and close out SEC play with a road matchup against Texas A&M. Alabama has one of the best defenses in the nation, but struggled to contain Florida’s high-octane offense. If they lose to Texas A&M and struggle in the SEC tournament, there is no chance we’ll see Avery Johnson’s squad playing meaningful basketball in mid March.

4.) The Gators Continue to get Absolutely Killed in the Interior. Alabama out-rebounded Florida 46-31, and grabbed 20 offensive rebounds. In comparison, Florida only grabbed 6 offensive boards on the night. The Gators were fortunate that the Crimson Tide had trouble capitalizing on numerous easy opportunities in the paint, ultimately only coming away with 11 second chance points.

5.) Chris Chiozza Almost Makes History. With 4 assists on the night, Chiozza is tied for the University of Florida’s all-time leader in assists with 547. Chiozza only produced 4 points, 9 rebounds, and 4 assists on the night. He didn’t need to do much with Jalen Hudson putting the scoring load on his back, but Saturday’s contest against Kentucky will certainly be one of Chiozza’s most memorable nights as a Gator.

The Gators will finish the regular season by hosting the 23rd ranked Kentucky Wildcats on Saturday afternoon at 12 p.m.