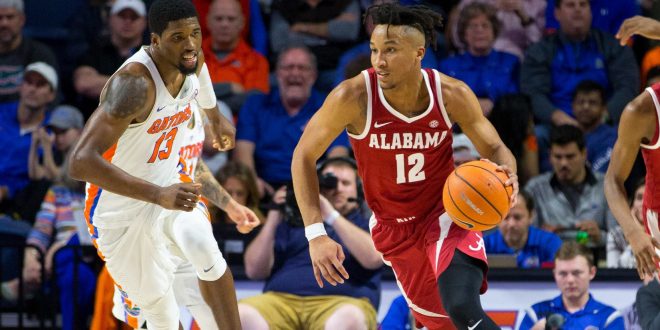 The University of Alabama men’s basketball team has had a rough past three games. The Crimson Tide took a trip to Rupp Arena, where they lost to the Kentucky Wildcats 71-81. The Tide battled their rival and No. 1 SEC team, Auburn University, losing 71-90. And then Alabama, having the youngest team in school history, was defeated by a hot Arkansas team, 73-76.

Now Alabama, 18-12 (8-8 SEC), has Florida, 18-11 (9-7 SEC), coming into town Wednesday night for their last home game of the season. Alabama looks to put an end to their three-game losing streak at the Coleman Coliseum before traveling to Texas A&M to finish the last five games of the year.

Byan Passink, the Alabama Basketball color analyst, said he knew the home stretch would be awfully tough and so far it has been. But, this Florida game could be Alabama’s big break. 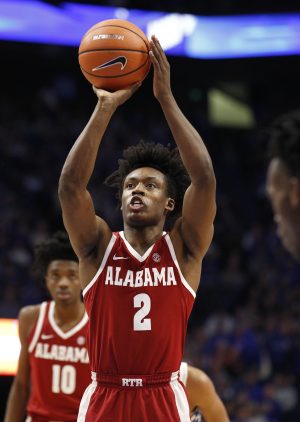 Alabama point guard Collin Sexton played in the loss to the Arkansas Razorbacks. He played more minutes than any other player Alabama in Saturday’s game. Sexton scored 15 points and had six assists in the loss.

“Sexton was among the more than 20 Division I players named in Friday’s Yahoo! Sports report. The players were identified as possibly breaking NCAA rules through violations that were uncovered by the FBI’s investigation into corruption in the sport,” according to ESPN.

Passink said Sexton has paid his penalty when he sat out the exhibition game followed by the season-opener against Memphis, Tennessee, the same week. After the NCAA looked into it, Alabama reinstated him. Passink said this sounds similar to the report that just came out last week. Therefore, he doesn’t think there’s any worry there for Alabama or Sexton.

According to Passink, Alabama is good about defending, rebounding and taking care of the ball. However, they are not one of the better three-point shooting teams in the league. Because of this, defenses are trying to make Alabama shoot a bunch of threes, opposed to driving the lane or going inside to Donta Hall.

Alabama doesn’t depend on the 3 point shot, Passink said.

Other than John Petty, who’s had his ups and downs this year, there’s not really another true three-point shooter on the team, Passink said. The analyst said they’ve got some guys that are capable of getting hot, but two out of Alabama’s top three three-point shooters are out for the year. The only guy left is Petty, because Alabama’s lone senior, Riley Norris along with Ar’Mond Davis are unable to play.

“They’ve played some really good teams, but getting beat by the boars and losing in all three of those games is not characteristic of the team,” Passink said.

Florida is sitting in the top three of SEC rankings. Alabama defeated the Gators,68-50, in Gainesville earlier this month. However, the Gators are coming off of a home win over Auburn, 72-66, the same team who beat the Tide 90-71 last week.

“Once the fans lick their wounds from Saturday and last wednesday, they will be excited for the Gators to come to town Wednesday night,” Passink said.

Kate Venezio is a fourth-year telecommunication-news student at the University of Florida. Kate does it all: Behind the camera she captures emotional moments as a photographer for the University of Florida Athletic Association. She's comfortable being in front of the camera, too. Kate interviews players, coaches, fans and family members for pre- and post-game coverage as a beat reporter for ESPN Gainesville/WRUF-FM. In addition, Kate produces the sports segment for the weekly WUFT News program. There, she's responsible for writing the script in its entirety to include production commands. The presentation includes video highlights and interviews taped and edited, and Kate then live anchors the final package on a daily deadline. In addition, she writes stories for wruf.com where she informs sports fans of local, state, and national trending topics. Kate also utilizes social media as a tool to help get the stories in front of viewers.
@@kate_venezio
Previous Eastside Rams One Step from Regional Final
Next Gators Throttle Crimson Tide as SEC Schedule Winds Down