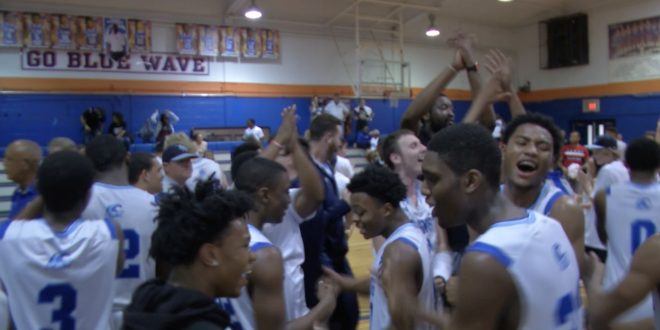 The P.K. Yonge Blue Wave boys basketball team will be joining the P.K. Yonge girls team in Lakeland this week. The Blue Wave’s stunned the crowd as the boys punched their ticket to the state semifinal in the last few seconds of the regional semifinal game Tuesday night. P.K. defeated No.2 Providence out of Jacksonville at home with a final score of 43-42 and were crowned regional champions. The Providence Stallions were the favorite coming into this game. The Stallions (the program of former Gator basketball player Patric Young) had a better record of 23-6 over P.K.’s 18-11 and they won the last five meetings between the two teams.

This was one of those games that came down to the wire. Providence led at halftime 22-12.

Providence even led by 12 early in the third quarter. However the Blue Wave’s started to catch up in the second half with four of six three pointers, and got up to four points behind providence in the third. However, in the fourth the Blue Wave’s fell behind again by six points with Providence’s Ahren Freeman hitting two free throws.

In the middle of the fourth, P.K.’s Jalen Speer hit back to back baskets and then Israel Wilcox hit a 3-pointer to tie the game up with 4:52 left. The game just went back and fourth throughout the quarter. Some Providence free throws made it a 40-36 game with the Stallions leading. Then P.K.’s Deontae Marvin’s shot from downtown made it a one point game with 56.4 left in the game.

The Stallions had some free throws with less than 10 seconds left in the game to make it a one point game again, but in Providence’s favor.

The ball was in Wilcox’s hands now but no one was open for him. He tried passing it to Speer, but he was defended by Providence so Wilcox took the last shot with a floater that was the game winner that caused the crowd to rush the court.

P.K. Yonge hasn’t been to the state tournament since 2008 and the Blue Wave have only won state title in school history, which was in 1991.

Up next, the Blue Wave will play Master’s Academy out of Oviedo, FL for the 4A State Semifinals on March 7th with tip off at either 10 a.m or noon.