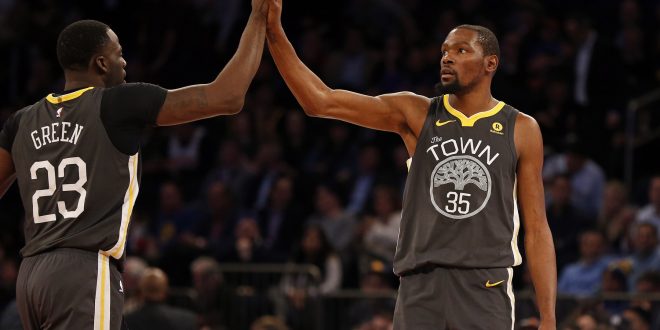 Warriors On the Road

The Golden State Warriors are on the road coming off of a three-win streak that saw them beat the Clippers, the Thunder and the Knicks after the All-Star break. They’re now 47-14 and 1st in the Pacific Division. The Warriors’ offensive rating is currently first in the league, but the team still struggles with turnovers.

Warriors Attack in the Third

Monday’s game took place just one day shy of the five year anniversary of Curry’s 54-point career high game at MSG. The 125-111 result marks the Warriors’ eighth consecutive win over the Knicks. Klay Thompson led the Warriors with 26 points while KD followed with 22 and Steph with 21. They went into the half slightly trailing 63-64 but returned in the third with a 39 point explosion that was unmatched by the Knicks 18 points put up. The Warriors have been consistently strong in the third quarter, with this being the seventh time they have outscored their opponent by at least 20 points in the third quarter this season. Rookie Jordan Bell made his debut after missing 14 games with an ankle injury contributing 3 points.

GS’s Stormy Rivalry with the Thunder

In other news, the NBA rescinded Draymond Green’s 15th technical foul, coming against Jerami Grant with just over a minute left in Saturday’s 112-80 win over the Thunder. He is now is just two technical fouls away from an automatic suspension and a $5,000 fine. But it was a tense match-up for obvious reasons and KD and Carmelo Anthony also got into it, earning them both technical fouls as well.

Draymond Green : 10 points on 5-8 shooting, 5 rebounds & 8 assists in 34 minutes (Picked up his 15th technical foul this season. 1 away from a 1-game suspension with 22 games left to play) pic.twitter.com/jY9zT4HwUb

Steph Curry seems to be optimistic about Golden State’s upward trend in the second half of the season as far as playoffs go. Now the Warriors head to the Wizards, but first will visit with DC-area children Tuesday instead of visiting the White House, ever since President Trump formally uninvited the championship team on twitter.

Going to the White House is considered a great honor for a championship team.Stephen Curry is hesitating,therefore invitation is withdrawn!

The Golden State Warriors take on the Washington Wizards on Wednesday at 8 p.m.

Previous J.D. Martinez is ready to go with the Boston Red Sox
Next Florida vs North Florida Midweek Game Preview