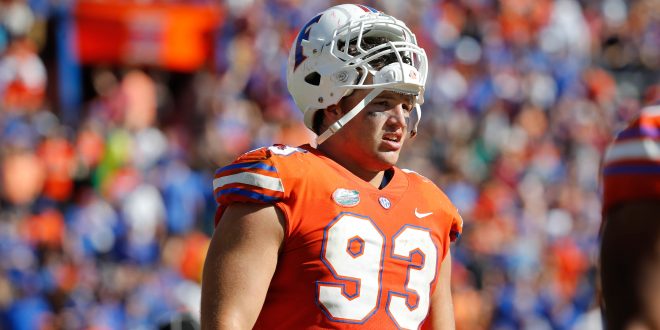 Scouts from all 32 NFL teams are presently in Indianapolis for the 2018 NFL Scouting Combine this week and next. On-field workouts start Friday with running backs, offensive linemen, and special teams as the players look to impress the scouts. So far, players on the offensive side of the ball have been preparing with team interviews, orientation and medical exams before starting workouts Friday and Saturday. Defensive registration and exams start Thursday and Friday for their workouts Sunday and Monday. Among the 300+ players invited to the Combine, six former Gators will work to prove their worth.

On-Field Schedule for the week

Former Gators at the Combine

Callaway played two strong seasons with the Gators in 2015 and 2016, starting 23 of his 26 game appearances. He totaled 89 receptions for the Gators with 7 touchdowns in his two years. The biggest questions the come with Callaway surround his suspension in 2017. Callaway was one of nine players suspended in a credit card fraud scandal before the start of the Gator’s 2017 season. The suspension had him out for the entirety of the season. Rather than hoping for a return to the action in the Swamp, Callaway prepared for a 2018 appearance in the NFL.

“That’s why, quite frankly, what he does off the field at the combine is really more important. It’s more about the meetings at night, the conversations he’s going to have.”

Piñeiro was a crowd favorite for the Gators, making 17 of 18 on field goals in 2017. After two seasons at Florida, Piñeiro decided to leave after his fourth year in college before graduating in order to pursue the NFL.

Townsend played four seasons with the Gators through his senior year in 2017. His performance in the latest season led the NCAA in punting with a 47.5 yard average per attempt.

Dawson played four seasons with the Gators as well. In 2017, he started all 11 games with an explosive defensive performance. He totaled 34 tackles with four interceptions that tied CJ Henderson’s interception count. He and Henderson tied for the SEC’s third most interceptions in the 2017 season.

Bryan also decided to leave the Swamp for the NFL before his time was up. The 2017 season alone, he totaled 40 tackles and four sacks in 11 starts. Many expect him to give an impressive performance in Indianapolis this week and to be claimed in the first round. Mayock says,

“I would tell you that Taven Bryan is a borderline first round pick. I really like what he brings to the table. “

Harris red-shirted for the Gators in 2013 and played every game from 2014-2016. Prior to the start of this last season, he suffered a torn Achilles tendon that had him out all of 2017. The biggest obstacle for Harris will be proving his recovery and playing at the level he played before his injury. Mayock comments,

“I think at the end of the day with that, he’s going to be a third day decision. The durability is a concern for a lot of the teams.”

It will be an exciting NFL Combine and an interesting recruiting season for NFL fans. The 2018 draft takes place from April 26-28.

I grew up in the Washington, DC area and now I'm a Gator. I'll always be learning more about myself, others and the world around me. And I'll always be talking about sports.
@kelsey_godman
Previous Falcons Looking to Improve For Upcoming Season
Next Minnesota Vikings Facing QB Dilemma This Offseason