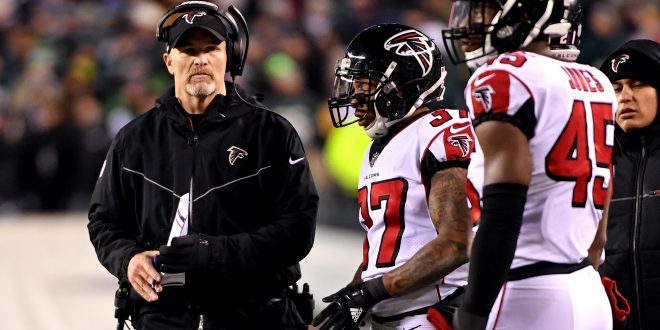 With the 2017 NFL season over, the Atlanta Falcons are looking to improve as they strive for next season’s Super Bowl. That begins now, during offseason. A few priorities include deciding on Vic Beasley, improving the offense, and stepping up on the defensive side.

For the past few weeks, Vic Beasley has been the topic of discussion for the Atlanta Falcons. During his 2016 season, he had a huge year with 15.5 sacks, along with making it to the Super Bowl. After having a position change to outside linebacker this past 2017 season, as well as a continuous hamstring injury, Beasley had a bit of a down year. Falcons General Manager Thomas Dimitroff and Coach Dan Quinn had to decide whether or not to keep him.

It was announced yesterday by Coach Quinn that the Falcons are exercising its fifth-year option with Beasley. He will be playing his original position as defensive end.

The Atlanta Falcons offense is the primary reason they were able to make it to Super Bowl LI. They can generate points like no other team in the NFL. During this offseason, their main focus is on how they can get more explosive plays and turn them into explosive scores. Coach Quinn says they improved on third down’s this past season, but must work on red-zone scoring now.

The Falcons have one of the youngest defenses in the NFL, but that doesn’t stop them from being one of the strongest. Several of their players made the 2018 Pro Bowl cut, including Keanu Neal and Deion Jones. Safety Keanu Neal is a former University of Florida player, who set a new NFL record for most forced fumbles by a defensive back in his first two seasons with eight. Deion Jones has turned himself into one of the league’s premier linebackers in a short amount of time. After coming up short in the 2017-2018 season, things are still looking promising on the defensive end for the Atlanta Falcons.