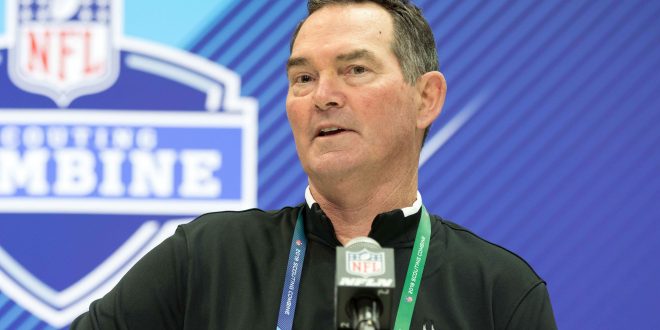 With the NFL Combine underway, one big question this offseason is who will be under center for the Minnesota Vikings. With the contracts of Teddy Bridgewater, Case Keenum and Sam Bradford set to inspire in two weeks, the team is facing a big dilemma.

Speaking at the NFL Combine on Wednesday, general manager Rick Spielman would give his thoughts on the quarterback picture.

While there have been many reports about what the situation will be in Minnesota, Spielman would address the reports by giving his take on what will happen.

“We will continue to evolve this process,” Spielman said. “We’ll circle back and finalize a game plan as we move forward.”

Another story coming out of this is in regards to the contract of Teddy Bridgewater. Headlines have been circulating about Bridgewater as a free agent, or if that will not be a possibility for him.

Spielman would state on Wednesday that it will be a league decision, and that it has yet to be resolved as of Wednesday.

With this contract situation ongoing, Spielman would not lose sight on the kind of person that Bridgewater is. Calling him a great teammate and an “unbelievable representative”, he would sing the praises of Bridgewater as free agency looms.

Zimmer’s Job on the Line

Zimmer has no problem with either of the three QBs being the starter, and has placed a lot of confidence in his guys.

“I feel very confident in all three guys. I love all three of them.” – Coach Zimmer on the QBs

Zimmer is going into this situation with a lot of apprehension. He would tell ESPN why the trepidation exists in this quarterback search for this season.

“If you go with the right one and he does like you anticipate, then everything is good,” Zimmer said. “If you pick the wrong one, it’s hard to win in this league without a quarterback.”

While it could be a situation that affects the rest of the Vikings, that is the last thing Zimmer wants. He would tell media that the team has been able to win 40 games in the last four seasons because “we’ve had a good football team.”

With the NFL season still months away, the three contracts will expire on March 14. Finally, the future of Bridgewater is still also up in the air, but will be addressed by the league sooner rather than later. Stick with ESPN 98.1 FM – 850 AM WRUF for updates on the Vikings’ situation as they become available.