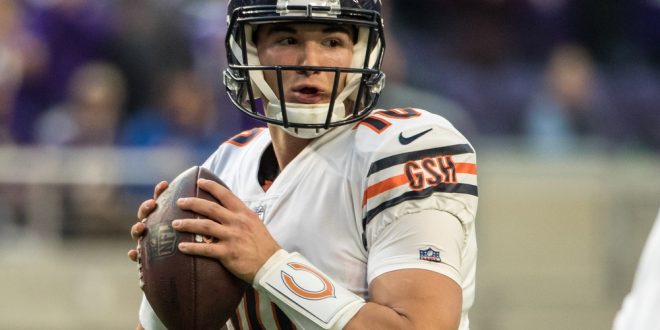 Chicago Bears To Drop Glennon and Run With Trubisky

After going 5-11 last season and finishing last in the NFC North, the Chicago Bears need a change. It’s official the Bears will be releasing Mike Glennon.

Glennon signed as a backup to Mitchell Trubisky was initially supposed to be there for three-years and make 45 million dollars, 18.5 million guaranteed.

But that will all change on March 14, which is the start of a new NFL season. Although games will not be played, major moves will be made in the offseason.

After releasing Glennon, the team will gain an 11 million dollar salary cap that will bring in much needed help.

Better Days for the Chicago Bears

Originally, Bears fans were lost as to why the team would put so much money into a backup Quarterback. Glennon only had four starts in the 2017 NFL season, which means the team paid him approximately 4 million dollars per game.

In Glennon’s four starts he threw 5 interceptions, definitely not what the front office paid big bucks for.

With the #8 pick in the 2018 NFL Draft, rumors are circulating saying the Chicago Bears are looking to draft top receiver Calvin Ridley from Alabama. Ridley should help the Chicago pass offense, which was ranked 31st last season and 29th overall in total points. The Bears put a little more faith in Trubisky this season and cut dead weight.