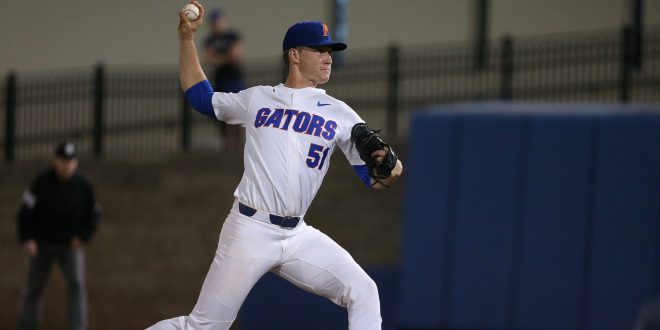 The Florida Gators(12-3), fresh off a pair of mid-week losses to UCF, are looking to bounce back as they host the Rhode Island Rams(2-8) for a three-game weekend series. Florida is 8-0 all-time against Rhode Island. The last time the two schools squared off the Gators swept the Rams by a combined score of 37-5 to open the 2015 season.

Rhode Island’s record isn’t necessarily a true indicator of the team’s ability. Four of the Rams’ eight losses have been by a single run. The trip to Gainesville is their second time traveling to the state of Florida this season. Last weekend the team was swept on the road in Jacksonville against the Dolphins. The Rams are coached by Raphael Serrato who is 90-82-1 during his time with Rhode Island.

Serrato’s bunch has gotten off to a slow start offensively. They’re averaging 2.5 runs per game and hitting a collective .212 at the plate. They’ve amassed just eight extra-base hits through ten games.

Senior outfielder Jordan Powell hasn’t gotten the poor hitting memo. He’s hitting .410 and has the only home run hit by a Rhode Island player this season. The Rams are one of just nine teams in the country with one home run. Powell is currently on an eight-game hitting streak. Dating back to last season, he has reached base safely in each of his last 47 games.

The Gators bullpen has maintained strong numbers this season. Collectively, they have a 1.59 ERA. Florida has surrendered nine earned runs in relief, five of those came against the UCF this past week.

Collectively, Rhode Island ranks 65th in the country with a 3.32 team ERA. Opponents are hitting .291 against the Rams. One strength of the Rhode Island pitching staff is their ability to avoid walks. They’ve issued just 2.77 walks per game. That’s good for 19th in the country.

Deacon Liput made his season debut on Wednesday against UCF. He went 0-for-2 with two walks.

Austin Langworthy is doing his best to break out of an early-season slump. He’s hitting .200 this season but has five hits in 16 plate appearances over his last five games.

Michael Byrne is yet to surrender a run in 2018. Dating back to last season, he’s pitched 18 consecutive scoreless innings.

Transfer Wil Dalton has also emerged as a major contributor to the Florida offense. He leads the team with 16 RBI and 5 home runs.

#Gators Wil Dalton has solidified himself in the lineup through the first 15 games.

I'm an above-average golfer with surprisingly great touch around the greens. Click on my twitter link for some sports talk.
@Ry_McGinn
Previous Florida Ready for SEC Tournament Opener Against Arkansas
Next Razorbacks Roll Past Gators in SEC Tournament