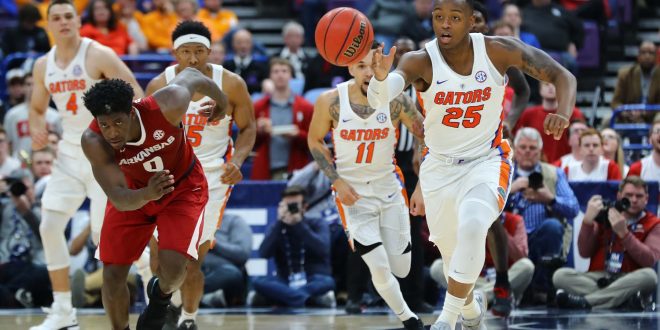 1.) Both Teams are Extremely Reliant on Their Threes. Arkansas led the SEC in three-point percentage (40%) during the regular season and have two of the top three-point shooters in the conference in Jaylen Barford (43.3%) and Darly Macon (42.6%). Meanwhile, the Gators rank 4th in the SEC at 37.4% and have three players shooting over 40% (Hudson, Koulechov and Stone). This dependence on three-pointers was not any different during this contest. The Razorbacks shot 8-19 (42%) from beyond the arc, while the Gators shot 13-32 (41%).

2.) The Razorbacks Controlled Most of the Major Statistical Categories. They were more efficient shooting from the field and from beyond the arc. Arkansas had six turnovers, while Florida had nine. They out-rebounded the Gators 43-28, including grabbing 14 offensive boards. They capitalized with 18 second chance points. The Razorbacks also outscored the Gators 30-20 in the paint. This all-around dominance by Arkansas is certainly the reason why they prevailed.

3.) Arkansas Can Make a Big Run in the NCAA Tournament. Jaylen Barford and Darly Macon are two of the best guards in the SEC and are arguably the best backcourt duo in the country. They combine to average 35.0 points per game and are both knockdown shooters from all three levels. Daniel Gafford anchors the defense and deters opposing players from entering the paint because of his shot-blocking ability. The Razorbacks have a great combination of experience and youth, and were minutes away from taking down the eventual national champions in North Carolina last year in the NCAA Tournament. They clearly have the potential to make a deep run in the tournament, it’s all a matter of who they get matched up against.

Jaylen Barford is one of the more underrated guards in college basketball. Was sensational tonight in Arkansas' win over Florida in St. Louis. Stud.

4.) Neither Team Took Advantage of Pace of Play. Both teams are loaded with high quality guards and thrive offensively when they push the ball in transition and play with pace. The Gators tried too hard to run set plays instead of advancing the ball quickly off of a Razorback miss or turnover. Florida ended the contest with two transition points, which is their lowest total of the year. Clearly, Arkansas didn’t need to play with pace considering they won the game, but they only finished with five fast break points.

5.) The Gators Wasted an Unbelievable Game by Keith Stone. Not only did he post 22 points and 5 rebounds, but he shot an extremely efficient 8-10 from the field, including 4-5 from beyond the arc. Chris Chiozza was the only other Gator who showed up on the evening. Florida’s two leading scorers, Jalen Hudson and Egor Koulechov, combined for 14 points on 4-20 shooting, including 4-12 from three.

The Razorbacks will face the Tennessee Volunteers in the semifinals of the SEC Tournament on Saturday afternoon at 3 p.m. The Gators next game will be in the NCAA Tournament, which will be determined on Sunday.