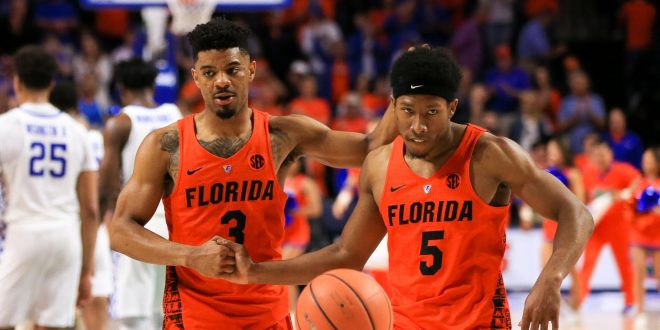 Florida’s SEC Tournament opener vs. Arkansas on Friday night is the start of a new season. For the rest of the year, all of the Gators’ games will be win-or-go-home. Florida drew the Razorbacks after Arkansas took down South Carolina, 69-64, in the second round of the SEC Tournament on Thursday night.

The Gators and the Hogs met once this season in Gainesville on January 17. UF won that game, 88-73, behind KeVaughn Allen’s 28 points on 6-7 shooting from beyond the arc. Friday night’s contest will tip-off 25 minutes after the conclusion of Mississippi State-Tennessee on the SEC Network. That game is expected to start at 7 p.m.

Florida has owned this series over the course of recent history. The Gators have beaten the Razorbacks in the last 8 meetings between the two teams by an average margin of 8.5 points per game. The last time Arkansas beat Florida was February 5, 2013. The last time these two squads faced off, the Gators dominated the Razorbacks, sinking 13-of-25 shots from long-range.

Three-point shooting is an area of the game that the Gators will have a decisive advantage in. Arkansas is allowing opponents to shoot 36.2% from beyond the arc during conference play, the third-worst percentage in the SEC.

If there’s one thing the Razorbacks do exceptionally well, it’s score the basketball. Arkansas is averaging 81.6 PPG, which ranks 33rd in the NCAA, and are ranked 20th in the nation in offensive efficiency. They’re also shooting a remarkable 40% from beyond the arc as a team. Arkansas’ senior guard trio of Jaylen Barford, Daryl Macon and Anton Beard have a lot to do with the team’s offensive success. The three upperclassmen are averaging a combined 44.4 points and 9.8 assists per game on 44.4% shooting from the field and 40.6% shooting from beyond the arc. Jaylen Barford was selected to this year’s First Team All-SEC squad, while Daryl Macon qualified for the Second Team All-SEC roster.

After Billy Donovan left the University of Florida, it was rumored that KeVaughn Allen, a Little Rock, Arkansas native, would decommit from Florida and sign with the hometown Arkansas Razorbacks on National Signing Day. Instead, Allen decided to stick it out at UF with new head coach Mike White and come to Gainesville.

While KeVaughn has had a successful career at Florida, some of his best performances have come against the Razorbacks. The last time these two teams met, Allen dropped 28 points on 6-of-7 shooting from beyond the arc. During his sophomore year, he finished with 21 points against Arkansas on 5-of-9 shooting from long-range. In Allen’s last three games vs. the Hogs, he’s averaging 20.3 PPG. During his career, Allen is averaging 16.4 PPG against Arkansas. There’s always a chip on KeVaughn’s shoulder when he plays the Razorbacks.

If you’ve listened to any of Mike White’s press conferences, you know he preaches defense and effort over prolific offense on any given day. He knows that consistency finds its roots in the ability to stop the opposing team on a night-to-night basis.

Putting words into action, the Gators have played terrific D over the course of their three-game win streak. During that stretch, Florida is allowing 61.7 points per game, which is 7.4 points below their season average. On top of that, those staunch defensive performances didn’t come against middle-of-the-pack teams. All of the last three victories have come against opponents ranked in the top 55 of the RPI.

Barring something absurd, both of these teams should be headed to the NCAA Tournament. Joe Lunardi’s latest Bracketology at ESPN has the Gators as a No. 5 seed taking on No. 12 Buffalo in San Diego in the East Region. Lunardi has Arkansas as a No. 7 seed taking on No. 10 USC in Charlotte in the East Region as well. Florida is 3-2 on neutral floors this season, while Arkansas is 3-1.

The Gators currently have 9 Quadrant I wins, which ranks third in the country, tied with Virginia. Only UNC (11) and Kansas (10) have more Q1 wins. Arkansas currently has 5 Quadrant I victories, 3 of which came at home.

Alabama 3rd to last team in.

Friday night’s game should tip-off sometime around 9:30 p.m. ET on the SEC Network. Tom Hart, Jon Sundvold and Molly McGrath have the call. You can listen to the game on the Gator IMG Sports Network with Mick Hubert and Mark Wise.