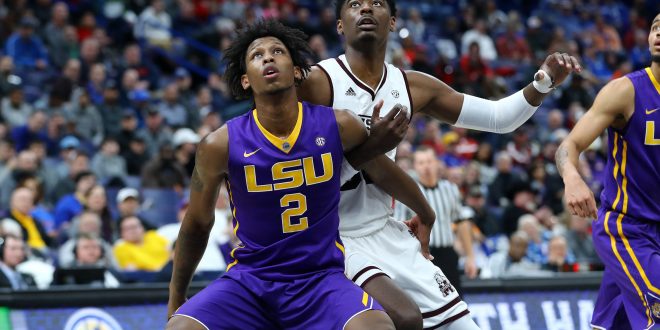 LSU will make their eighth appearance in NIT history as a third seed in a season which featured huge improvements compared to 2016-17.

They’ll host the Louisiana-Lafayette Ragin Cajuns Wednesday evening at 7 PM on ESPN 3. They finished the season 17-14 after losing to Mississippi State in the second round of the SEC tournament. The Tigers went 8-10 in SEC play.

First-year head coach Will Wade made progress after taking over a Tiger team that was 10-21 the year before. Freshman point guard Tremont Waters led them with 16 PPG this season and almost fueled a massive comeback last week against Mississippi State.

Waters scored 28 points and helped cut a 19-point deficient to one but missed a desperation three as time expired.

This is LSU’s first postseason game since 2015.

LSU had seven wins over teams with a top 50 RPI. They were predicted by many to finish last in the SEC. They’ll face the Rajin’ Cajuns, who went 27-6 this year but lost to UT Arlington in the Sun Belt Championship.

They were the top seed in their conference and heavy favorites after going 16-2 in conference play.

The two schools, who are only an hour apart, didn’t play from 1945 to 2001. This meeting is the sixth since the series was renewed and LSU leads the series 36-10 all-time. Louisiana-Lafayette has not won since 1944.

The NIT will be played under experimental rules.

The games will be played in four ten-minute quarters as opposed to the usual two halves. The paint will expand to 16 feet like the NBA, compared to the usual 12-foot width.

The most drastic rule change is after an offensive rebound, the shot clock will reset to 20 seconds instead of 30.

The three-point arc will also be extended to the international length of 22 feet, 1 3/4 inches. The winner of this game plays the winner of the Utah vs. UC Davis game in the second round of the tournament.