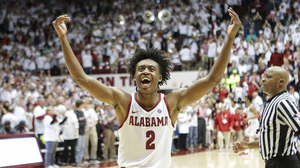 Alabama’s Shot At the First Round of the NCAA Tournament

The ninth ranked Crimson Tide are proving that they are more than just a football school. After securing an at-large bid with a buzzer-beating finish against Texas A&M, Alabama found their way into the 2018 NCAA Tournament for the first time in six years. The Crimson Tide is set to face Virginia Tech in the first round of the tournament Thursday night at 9:20.

Losing six in a row to close out their regular season, Alabama redeemed themselves with two wins in the SEC Tournament. First, a last-second win over Texas A&M, followed by a win over Auburn and then losing to Kentucky in the semis. Freshman Collin Sexton seems to be the star of the show, averaging 19 points per game this season.

In the SEC Tournament, Sexton finished Texas A&M with the buzzer-beating finger roll to close out his 27-point show. The next day, Sexton racked up a 31-point, seven-rebound performance against in-state rival Auburn. And even though the Tide came up short against Kentucky, Sexton still managed to put up 21 points, five rebounds and three assists.

Now, the ninth-seeded Alabama prepares for their first-round showdown against Virginia Tech on Thursday. The Tide is expected to rely heavily on the defense and none other than the freshman guard, Collin Sexton.

The Tide seems to have a leg up on almost every team defensively, consistently blocking shooters and keeping games close. Offensively, the team lacks the ability to make shots from the three, are inconsistent with free throws and rack up too many fouls than they can handle.

With all this said, Virginia Tech isn’t expected to lie down and make it easy for the Tide. The 8-seeded Hokies have had a similar season compared to Alabama, having a roller coaster of wins and losses. They have five different players who average double-digits scoring and finished 32nd in the country in assists this season.

The winner of this game will advance to the second round and play on March 17. They will square off against the winner of the Villanova vs. Radford game.