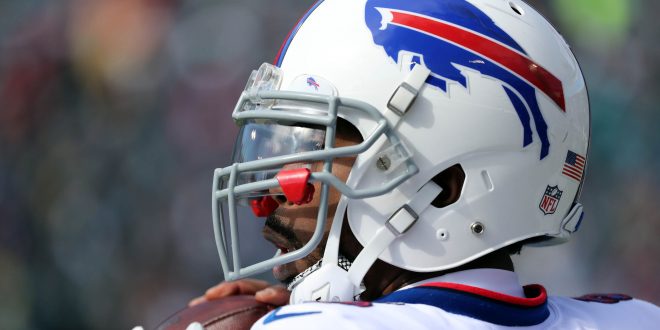 After becoming just the second team in NFL history to go 0-16 in a season, big changes can be expected.

So when the Browns decided to keep head coach Hue Jackson aboard, it shocked many people around the NFL. It’s not often a coach that’s a combined 1-31 in 2 seasons gets to keep his job.

Others have commended the Browns for having patience with Jackson, and following a flurry of off-season moves, in enters Tyrod Taylor. The Browns acquired Taylor from the Bills last week in exchange for the 65th pick in this year’s draft.

Taylor to Start for Browns

Since then, Jackson has echoed that Tyrod Taylor will be the Browns starting quarterback this season. Taylor has said he doesn’t intend on just being a “bridge” quarterback for a rookie.

The 8th-year veteran will bring experience and explosiveness to the quarterback position. Something the Browns have badly needed over Jackson’s tenure.

But while the Bills made the playoffs for the first time since 1999, Taylor had an up-and-down season.

He was infamously benched while the Bills were still 5-4 for Nathan Peterman, in Week 11, who went on to throw 5 interceptions against the Chargers. He produced only 3 points against the Jaguars in the AFC Wild Card game and was benched in that one too.

But Taylor is a strong character that is prepared to put his struggles behind him to help lead the Browns forward.

Both Taylor and the Browns are looking to put last season’s struggles behind them.

The acquisitions of Taylor, Jarvis Landry, Carlos Hyde and Chris Hubbard will surely help the Browns build a more consistent offense. The Browns still have a ridiculous five draft picks in the first three rounds of the 2018 draft.

Taylor is owed $16 million this season, but he is a free agent in 2019. The Browns are not committed to him long-term, so they will probably think about drafting a quarterback even if Taylor is named the starter.

In the end, Jackson’s reluctance to use yet another rookie quarterback may be Taylor’s greatest blessing. Deshone Kizer was woeful last season, and Cody Kessler wasn’t much better the year prior.

Taylor possesses the ability to succeed in the NFL, but he has been wildly inconsistent throughout his career.

In Cleveland, he’ll get the chance to prove his worth.

Sports media and management student at the University of Florida. Content creator for ESPN 98.1 FM/ 850 AM WRUF.
@TheEdgarChavero
Previous March Madness: Alabama Defeats Virginia Tech In The First Round
Next Kirk Cousins Gets Massive Pay Day And Finds Right Fit With Vikings 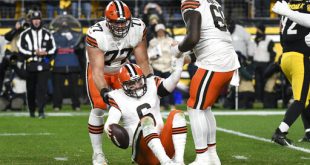 With the Cleveland Browns entering the final week of the season, multiple questions have risen …