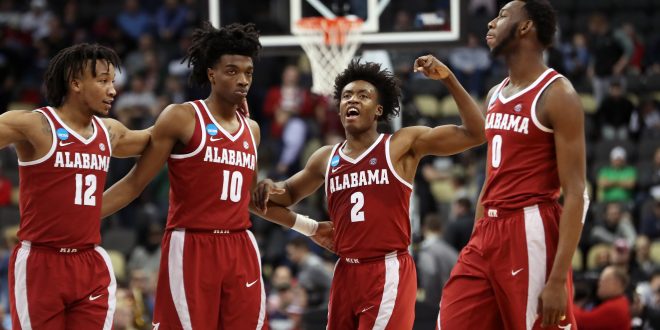 March Madness: Alabama Defeats Virginia Tech In The First Round

March Madness is underway! Yesterday, No. 9 Alabama defeated no. 8 Virginia Tech in the first round of play.

The Crimson Tide survived in Pittsburgh by a 3 point margin. Although the Hokies made a buzzer-beating layup, it wasn’t enough.

Alabama’s point guard Collin Sexton played a feisty and aggressive game on Thursday. Virginia Tech came after Sexton leaving him frustrated and beat up. However, Sexton was persistent through it all and managed to finish with 25 points on the board. As a result, he had the most points of the game.

Also from Alabama, John Petty, a freshman reserve guard, drained six 3-pointers. Coming off of the bench, he had a huge contribution to the way Alabama finished on Thursday.

Virginia Tech’s point guard Justin Robinson lead the team with 19 points. His stride came to a halt after being fouled out with 48 seconds left in the game. This lead to Sexton making one of the two free throws. This momentum was crucial for Alabama.

In the last minute, many noteworthy moments happened. Alabama was fouled three times. Consequently, Alabama had free point opportunities and they took advantage.

Sexton made two free throws after being fouled by Chris Clarke. This gave Alabama an 83-77 lead with 37 seconds remaining.

Sexton made two free throws after being fouled by Wabissa Bede. This gave Alabama an 85-79 lead with 25 seconds remaining.

Ingram made one of the two free throws after being fouled by Ahmed Hill. This gave Alabama an 86-79 lead with 17.9 seconds remaining.

While the entire game was neck and neck, both teams were desperately looking for some breathing room. This momentum change came for Alabama when Collin Sexton shot a fadeaway jumper with 1:34 remaining.