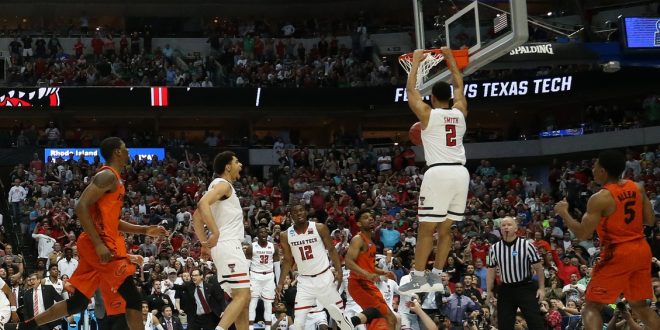 The Texas Tech Red Raiders defeated the Florida Gators 69-66 in thrilling fashion. Keenan Evans led the Raiders with 22 points on 8-14 shooting. Zhaire Smith added 18 points, 9 rebounds, and 7 assists. The Gators were paced by Jalen Hudson’s 23 points and 4 rebounds. Florida had two opportunities to tie the game with under 15 seconds left, but failed to convert either attempt.

The Red Raiders are going to the Sweet 16 for the first time since 2005 after beating the Gators. pic.twitter.com/mm0P1F7hrK

The two guards combined for 40 of the Red Raiders’ 69 points and consistently made impactful plays on the offensive and defensive end. Evans only had one assist on the night, but it was the most important play of the game. With the Red Raiders up by 3 with 29 seconds left in regulation, Evans split the defense and lobbed the ball up to Smith, who emphatically threw down an alley-oop. Both guards have led the Red Raiders all season long and will continue to lead them as they continue on in the tournament.

2.) Koulechov and Allen Came Up Short.

The last sequence of the game perfectly summed up their performances. The Gators were down by 3 with 15 seconds left and the ball. Chiozza drove towards the basket and the defense collapsed, which opened up space for Koulechov on the wing. Chiozza dished the ball out to Koulechov, who put up the potential game-tying three. He left it short but the Gators were fortunate enough to come up with the offensive rebound. The ball was then kicked to Allen in the corner, who also left it short. Both players struggled mightily on the evening. Koulechov had 12 points and 4 rebounds while shooting 5-13 from the field and 2-8 from three. Allen went 2-11 from the field and 1-5 from three with 7 points.

Egor Koulechov on his last-second attempts to tie the game:

3.) Foul Trouble Impacted the Outcome of the Game.

Star point guard Chris Chiozza picked up his fourth foul with 13 minutes left in regulation. Texas Tech was in the bonus for the final 13 minutes and 23 seconds of the game. The Red Raiders failed to take advantage of this by missing numerous 1-and-1 opportunities and only converting 5 of 10 attempts from the line. However, the Gators struggled to create offense with Chris Chiozza on the bench. Mike White was forced to give Mike Okauru extended minutes and had Okauru and Allen take over point guard duties. Jalen Hudson also had to miss some time in the second half after picking up his third foul with 14 minutes and 36 seconds remaining.

4.) Hudson Kept the Gators in the Game.

With Chris Chiozza in foul trouble for a majority of the second half, Jalen Hudson stepped up to the tune of 23 points and 4 rebounds on 8-16 shooting overall and 2-5 from beyond the arc. He had to play with the ball in his hands more than usual, and was able to consistently create open opportunities for himself. Even though Hudson had a stellar performance, he’s not great at creating for his teammates, so the Gators’ offense struggle with Chiozza on the bench.

5.) The Gators’ Future is Filled With Uncertainty

Chris Chiozza and Egor Koulechov are set to graduate in the spring, and Jalen Hudson will potentially leave for the NBA Draft. It’s expected that KeVaughn Allen will return for his senior season, but there’s no guarantee of that. The Gators will see a lot of new faces in Gainesville next year. Chase Johnson and Isaiah Stokes will be coming off redshirt seasons and highly-rated recruits Andrew Nembhard, Noah Locke and Keyontae Johnson will be arriving for their freshman season. It’s difficult to gauge how good the Gators will be next season because of the uncertainty that lies ahead.

Chris Chiozza on the end of his career at Florida:

Egor Koulechov on the end of his career at Florida:

With the loss, the Florida Gators’ season is officially over. Texas Tech will face the winner of Butler and Purdue in the Sweet 16 in Boston.