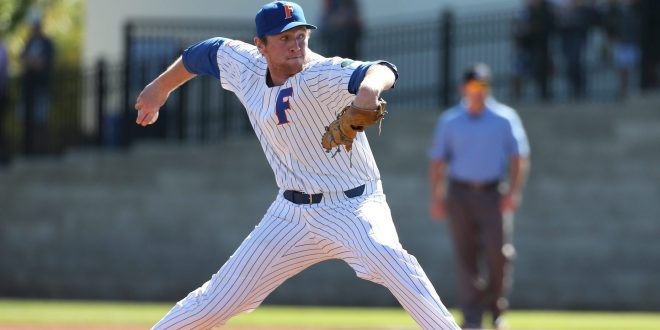 A day after giving up a season-high 15 runs, Florida took down South Carolina 3-2 giving the Gators a series win over the Gamecocks to open the SEC portion of their schedule. The win improves the Gators’ record on the road to 5-3.

Florida’s first two runs came via Wil Dalton and JJ Schwarz home runs. Dalton led the game off with a solo shot. He hit three home runs this weekend against South Carolina and now has eight on the year.

Schwarz hit his fifth home run of the season in the top of the fourth to extend the Gators lead to 2-0. Jonathan India scored later in the frame on a sacrifice fly off the bat of Deacon Liput making the score 3-0 in favor of Florida.

Sunday starter Tyler Dyson improves to 4-1. He had to battle out of jams throughout his five innings of work. Dyson’s only clean inning came in the second. In every other frame at least two Gamecocks reached base but they failed to capitalize for big damage. South Carolina left nine runners on base in the game, eight of those were stranded in the first five innings.

The first South Carolina run came in the bottom of the fourth on a Danny Blair single. That made the score 3-1 Gators. The Gamecocks second tally came on a Jacob Olson solo home run in the fifth. Dyson hit the following batter prompting Kevin O’Sullivan to turn to freshman Jordan Butler in relief. He induced a strikeout and a double play to get out of the inning. Butler worked 1.2 innings, walked one and surrendered no hits.

Michael Byrne came on in the seventh for a seven-out save. It took him six pitches to get his first three outs and he was flawless aside from a two-out walk issued in the eighth. The save is his fifth of the year. Here’s his final line: 2.1 IP, 0 H, 1 BB, 0 ER

We take the series as Michael Byrne picks up his 5th save of the year. #FeelTheByrne pic.twitter.com/tYMLoOUKpB

Florida will host Jacksonville on Tuesday before welcoming the red-hot No. 5 Arkansas Razorbacks to town next weekend.

I'm an above-average golfer with surprisingly great touch around the greens. Click on my twitter link for some sports talk.
@Ry_McGinn
Previous Texas Tech Takes Down Florida in Last-Minute Thriller
Next Gator Softball Picks Up Win Over Georgia in Series Finale